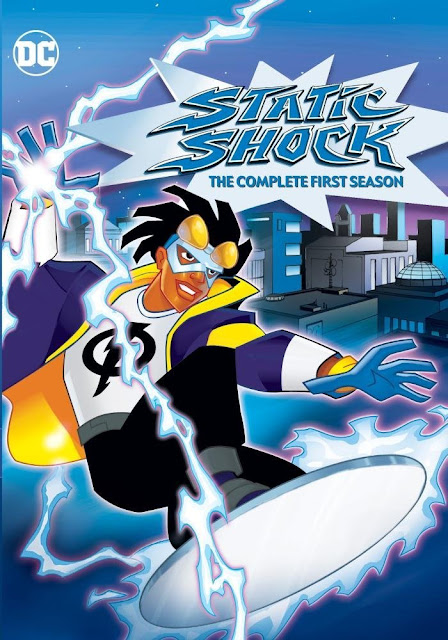 The Warner Archive March 2017 DVD release of the 2000 - 2001 first season of the four-season WB Kids series "Static Shock" takes good advantage of the tragic death of Saturday morning cartoons and the subsequent glut of big-budget superhero films. The release provides current "Static" aficionados a good chance to relive this show (Archive is releasing S2 on May 23, 2017) and for other fanboys a chance to discover a show that reinforces the belief that animated hero fare is much better than the modern live-action versions.

The following YouTube clip of the "Static" opening credits provides a good sense of both the fun spirit of the show and of the vibrant colors. It further features an amazing number of villains for such a short film and includes an awesome spidey sense of familiarity.


Fans of the CW live-action prime time series "The Flash" particularly will find favorable comparisons between that show and "Static." Both adorkable 20-something Barry Allen of "Flash" and cute everyteen Virgil Hawkins acquire their "meta" abilities by being at the wrong (or right?) place at the wrong (or right?) time. In the case of Virgil, exposure to chemicals while being an (almost literal) shotgun attendee at a gang bangers ball grants him electromagnetic powers that he uses to combat the similarly affected "bang babys," who use their new powers for evil. Virgil (a.k.a Static) even has his "Cisco" in best pal/tech. guy Richie. One difference is that Richie does not gleefully delight in granting the villain of the week an amusing nickname.

Including very positive messages without beating them into the heads of the viewers awesomely sets "Static" apart from otherwise fantastic superhero animated shows. Virgil is a black student with good grades and has nice friends in his happily integrated high school. He additionally has a typical middle-class family life with fellow-teen sister Sharon and supportive widowed community center executive dad Robert. It is equally nice that Richie being white never is an issue except in a "very special episode" that centers around the racism of the father of Richie. It is equally terrific that the teens who embrace the dark side are equally likely to be white or black.

"Static" works as well because it has some of the best VO actors in the business. Amazingly prolific character/VO actor Phil LaMarr (arguably best known as Hermes on"Futurama") nails the Peter Parker style humor, soul, and insecurity of Virgil. Veteran "Flash" (and oh so many live-action and VO roles) actor Jason Marsden does just as well making Richie a typical 21st century sidekick who is beyond the "gee whiz" stage of that archetype.

Other regular cast members who are like their superheros with a little life in them include Kevin Michael Richardson as Robert Hawkins and "Young Justice" (and "Wonder Years") veteran Danica McKellar as Frieda Goren, who is the gal pal/unrequited love interest Gwen Stacy of "Static."

The aptly titled pilot "Shock to the System" strikes a good balance between exposition and action that such episodes require. We meet a pre-Static Virgil going about his daily life and experiencing the events that make him the man that he is today. He then takes his longtime bully to school. He is back next week to take on an evil corporation, but most S1 episodes follow the pattern of a new or old foe creating mayhem only to get zapped. An especially ominous threat comes in the form of the scaled-down version of the Legion of Doom known as Meta-Breed

The creators and the writers of "Static" provide our hero with the limitation of having any interference with his ability to harness electricity rendering him powerless. This keeps things interesting and often humbles our bright light.

The Archive extras include a map of the city of Dakota (complete with a record of every battle) where the series is set, a feature on the tech. that Richie develops, and a "Bad Guy Beatdown" game that allows players (and playas) a chance to play hero.

Anyone with questions or comments regarding "Static" is encouraged to email me; you also can connect on Twitter via @tvdvdguy.