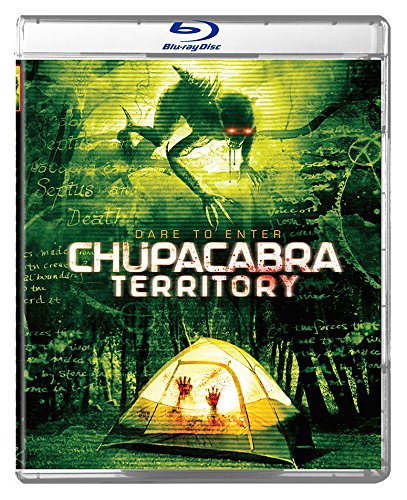 The Maltauro Entertainment April 11, 2017 Blu-ray release of the 2016 horror film "Chupacabra Territory" reminds us at the start of the 2017 camping season that it is not safe to go back in the woods. This lost footage film about meddling kids in search of a legendary beast reinforces this message from their reel-life older siblings in the (Unreal TV reviewed) 2016 Maltauro film "Never Open the Door" regarding the same lesson.

The following YouTube clip of the spoilericious "Chupacabra" trailer explains the premise and provides an accurate sense of the gore in the film in roughly two minutes.


The opening scenes of "Chupacabra" quickly establish that the activities of the FBI extend beyond investigating the email practices of one nominee in the 2016 presidential campaign and the nature of the relationship that the other one has with Russia. The film opens with exposition that explains that the story that we are about to see is recovered recordings of the cameras of four 20-somethings who went into a national forest in search of the titular legendary creature. The nature (no pun intended) of this introduction largely ensures that every member of our Scooby gang is going to be Chupacabra chow within the next 90 minutes of reel time. The entertainment relates to seeing the mayhem that brings this about.

The action shifts to Velma-like witch/cryptozoologist Amber driving Joe (who is the studly blonde Fred of the group), whiny and soft Shaggy-like coward Morgan, and Scoobyesque mascot/cameraman Dave to the aforementioned woods in search of (pun intended) the aforementioned mythical being. Aside from the massive carnage and limited quasi-explicit sexual activity, only the element along the lines of an abandoned gold mine or evidence of a large amount of oil prevents this from being a true Scooby style adventure.

The gang soon meets the requisite creepy local who shows them the equally required mutilated livestock and shares his perspective regarding the titular creature. This leads to circumventing the security measures that are designed to prevent campers and hikers to end up with both their innards and their naughty bits consumed.

Writer/director Matt McWilliams then goes full neo-old school in having the gang encounter increasingly creepy evidence of their prey. Of course, this begins with rustling and suspicious vocalizations and leads to discovering tracks and other more direct evidence that the kids are not alone.

The frailness of some of these Millennials, practical jokes involving the bodily fluid of a woodland creature, and other risque humor keeps things interesting as the peril comes closer and the body count begins rising. All of this culminates in an amusing ritual that leads to a variation of downward dog and ultimately to the mishandled camera being left to end up in the hands of the feds.

The freshness that prevents "Chupacabra" from being a slightly faded carbon copy of the mother of all lost footage films "The Blair Witch Project" includes giving the meat suits distinct personalities, not having our gang prematurely lapse into sheer terror, and decent production values. As such, fans of the genre will want to check it out if only to discover it before it becomes a cult classic.

Anyone with questions or comments regarding "Chupacabra" is welcome to email me; you also can connect on Twitter via @tvdvdguy.