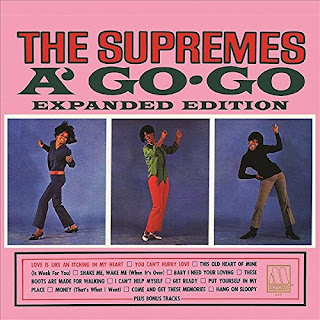 The fun regarding the April 25, 2017 Universal Music Enterprises 2-CD release of the 1966 record "The Supremes A Go-Go" extends well beyond the copious opportunities to joke about this being an album by the mother of "Blackish" star Tracee Ellis Ross. The upbeat girl group sound, which is crystal clear and vibrant in the remastered stereo, of the trio forces you to feel good regardless of your circumstances at the moment. (The set includes remastered mono recordings for purists.)

The following YouTube clip of a promo for "Go-Go" provides a look at the release and a strong sense of the music.


The numerous Supremes-style covers of the hits of the day further add to the fun. This trio doing the Nancy Sinatra girl-power anthem "These Boots Are Made For Walking" alone justifies buying the release. A reworking of the catchy white bread 1965 song "Hang on Sloopy" by The McCoys is an odd choice that works.

A dearth of soul is the culprit behind not realizing that a personal "Go-Go" favorite "Shake Me, Wake Me (When It's Over) is a cover; The Four Tops are the original band. The memorable aspects of this one include the changes in tempo and the heartfelt angst regarding concern that what is considered a solid relationship is facing an imminent demise.

The press materials for this release share that "Go-Go" is the first #1 album for Diana and the girls, the first #1 album for Motown, AND the 1st #1 album EVER for an all-female vocal group. This album featuring "Where Did Our Love Go" and "You Can't Hurry Love" is especially apt considering the Soft Cell and the Phil Collins 80s-era covers of those songs respectively.

The bonus tracks on the first disc include a cover of the swinging Tom Jones classic "It's Not Unusual" and an equally successful risk regarding the "The Rolling Stones" hit "(I Can't Get No) Satisfaction."

The alternative tracks that comprise the second CD offers a glimpse of the covers that might have been and further prove that The Supremes can do no wrong.

UME including two booklets continues the release theme of dual bonuses. The first booklet is a "making-of" chronicle of  "Go-Go." An insightful essay is a highlight.

The even more special booklet "A night with the Supremes" is a condensed history of the group, complete with awesome candid and backstage photos.

Anyone with questions or comments regarding "Go-Go" is strongly encouraged to email me; you alternatively can connect on Twitter via @tvdvdguy,