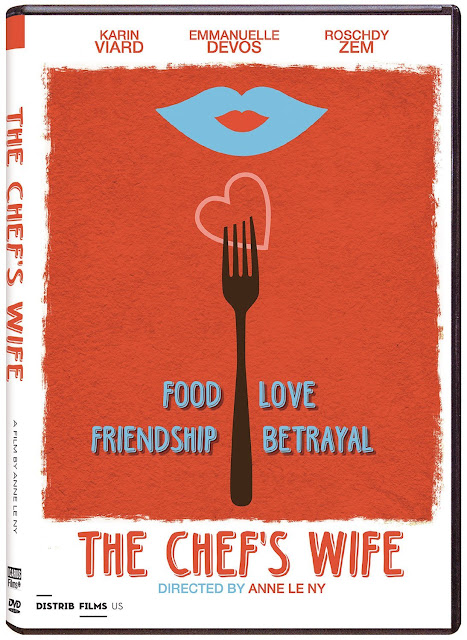 The increasing expansion of home-video company Icarus Films beyond "innovative and provocative" documentaries into foreign fictional films increasingly demonstrates the good eye of this company regarding a range of films. The May 9, 2017 release of the 2014 French comedy "The Chef's Wife" starring Emmanuelle Devos is a terrific followup to the March 2017 Icarus release of the (Unreal TV reviewed) Devos film "Just A Sigh." These two introductions to the work of Devos suggest that she always plays a conflicted middle-aged woman.

The following YouTube clip of the "Chef's" trailer is very true to the spirit and the style of the film with minimal spoilers. It also achieves its goal of getting you to want to see the film.

This time around Devos plays Carole, who is the unhappy wife/co-worker of celebrity chef/restauranteur Sam. The despair of Carole regarding feeling overshadowed and overwhelmed professionally and not being sure if she wants to remain married to Sam prompts her to seek services from a local job-training center. That effort to improve her life bring her into contact with career counselor Marithe.

The angst of Marithe largely revolves around empty nest syndrome in that her son is applying for a scholarship to attend MIT. Further, it seems that the modern friendship that she has with ex-husband Pierre and his current wife Nathalie provides her only social outlet. "Chef's" writer/director Anne Le Ny plays Nathalie.

The mid-life crises of our French versions of Kate and Allie collide (and their friendship commences) when Marithe discovers on dining at the restaurant of Sam that Carole has been leading a secret double-life and has been using Marithe to coneal her covert activities. A large dose of empathy provides the primary motivation for Marithe to volunteer to closely work with Carole to achieve personal and professional happiness.

Much of the humor relates to Marithe only learning the extent to which Carole is a white-hot mess after getting involved in her life. The latter coercing the former into joining her for an afternoon at a country club is one of the best segments in the film. Highlights include Marithe receiving a reminder why you should never lend a friend your car and discovering that Carole has a stable relationship.

The arguably best scene in the film revolves around Marithe presenting Carole the results of a career aptitude test; the computer insisting that Carole is only well-suited for one hilariously obscure profession is relatable to all of us who have had such results determine that we are best suited for jobs such as clown or butter churner.

The complications become even more complex when getting to know Sam reinforces the belief of Marithe that all the good ones either are married or gay. The knowledge of Marithe that Carole has un pied out la porte leads to the marital status of Sam not being a fatal flaw regarding a potential relationship with him.

The most broad (no pun intended) humor relates to a group of women who are the training center to learn new skills in the wake of being laid off from their factory jobs. The two worlds in "Chef's" collide regarding this when Marithe convinces Sam to hire these women for his new restaurant. The scene-stealer regarding this plot line is a gruff 50-something mother hen type to her "girls" who is not well-equipped for a job with a great deal of public contact.

The surprising and relatively rapid twists at the end of "Chef's" provide an especially delectable dessert to this five-course banquet of good humor and relatable insights.

On a larger level, "Chef's" provides an entertaining alternative to the teen-oriented fare that is dominating cineplexes this summer.

Anyone with questions or comments regarding "Chef's" is encouraged to email me; you also can connect on Twitter via @tvdvdguy.