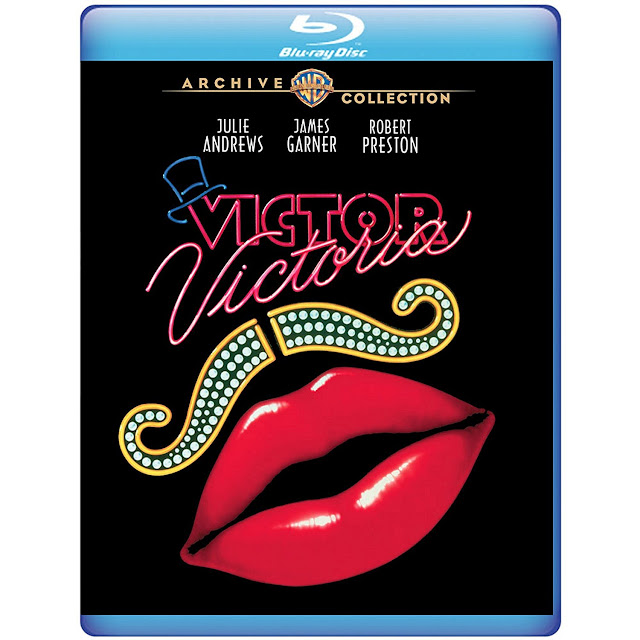 The Warner Archive Blu-ray release of the 1982 musical comedy "Victor/Victoria" is a prime example of the value of such releases in that they provide a chance to watch an uber-enhanced version of a decades-old film from a modern perspective. In this case, this shows the awesomeness of Archive releasing "Victor" during the Pride month of June 2016 and the related aptness of  posting this review a month ahead of Pride month 2017.

The numerous awards that reflect the absolutely fabulous vibe of "Victor" include a Best Music Oscar for long-time collaborator of producer/director/writer Blake Edwards Harry Mancini. Long-time Edwards spouse Julie Andrews is the Golden Globe winner for Best Actress in a comedy or a musical that year for portraying the titular woman pretending to be a man pretending to be a woman. Most of the other awards are from critics' societies.

The following YouTube clip of the "Victor" theatrical trailer showcases how the the broad humor of Edwards and the Blu-raytastic jazzy '30s music blend so well.


The gayalicious vibe commences within seconds of "Victoria" beginning. The opening shot that quickly reveals that a slumbering pajamas-clad Carole "Toddy" Todd (perfectly played by Robert Preston) is sharing a bed with a bare-chested stud easily 30 years his junior is enough to preclude a screening at the "Beauty and the Beast" banning Henagar Drive-In but should not affect most viewers in 2017. However, folks who are old enough to remember the Reagan-era theatrical release of "Victor" can picture the shock value of this scene back then. As the following paragraphs demonstrate, this scene is only the tip of the iceberg regarding the ahead of its time depiction of gay themes in "Victor."

In the wake of losing his cash to thin thinly disguised rent boy, cabaret singer Toddy loses his job as the headliner at an elegant 1934 Paris club (which looks spectacular in Blu-ray) in the wake of his major role regarding a riot at that club. This is in the wake of Toddy watching the failed audition of broke straight girl opera singer Victoria at said establishment.

Meanwhile, Andrews does Charlie Chaplin very proud in using her highly expressive eyes and other talents to convey her intense hunger as she peers inside a restaurant window to watch an obese man eat a pastry that literally is oozing cream. The Chaplin vibe continues with Andrews doing little tramp schtick on returning to her seedy hotel room; hanging her umbrella on the arm of the hotel manger is the most direct homage to Chaplin.

The second meeting between starving artist Victoria and not faring much better Toddy sets the main action in motion. A series of unfortunate circumstances leads to the fortunate inspiration that Victoria commence a career under the guise of being accomplished female impersonator Polish count Victor.

An early wrinkle comes in the form of James Garner, who puts his trademark roguish charm (showcased in roles such as the lead in the Unreal TV reviewed "Nichols") to excellent use, as connected legitimate nightclub owner from Chicago King Marchand. Though straining the heterosexual end of the Kinsey Scale, Marchand feels an immediate and strong attraction to Victoria on seeing her in one of the several lavish musical numbers that further justify the Blu-ray release. Seeing the faces of Marchand and his bimbo companion Norma Cassady (whom Lesley Ann Warren nails as perfectly as the principal players portray their roles) when this performer removes his wig to reveal that he is man is one of the best moments of "Victor."

Despite being a macho macho man and doing business with real wiseguys who likely consider eating quiche a capital offense, believing that the girl of his dreams is packing the same heat as him does little to quell the desire of Marchand. The conviction of this maverick that Victor really is a woman plays a role in his willingness to play the crying game.

This '80s-era plot about a rugged straight man openly acknowledging his love for whom he has many reasons to believe is a man and pursuing that relationship is another Pride-worthy element of "Victor." The ensuing hilarious portrayals of gender stereotypes and the limits of Marchand regarding his willingness to let the world believe that he is gay further contribute to the fun.

The climax of "Victor" is equally memorable in giving musicals veteran Preston a well-earned chance to shine. Edwards shows great wisdom in not even trying to have anyone try to follow that act.

For her part, Andrews gives a follow-up performance to her career-change role in the (soon-to-be reviewed) '81 Edwards comedy "S.O.B.," in which this former "Mary Poppins"/"Sound of Music" star famously shows her "boobies." The aforementioned populace of the Reagan-era will remember that Andrews takes on these roles to alter her clean-cut image. The movie-going public should be f**king grateful that she does so. (On a related note, they are real and they are spectacular.)

On a more general level, "Victor" pulls off the feat of having a 2:15 run time that is roughly 50-percent longer than the length of most comedies from any era. Comedy is tough, but Edwards once again shows that he is up to the job.

The very special Blu-ray feature is audio commentary by Edwards and Andrews.

Anyone with questions or comments regarding "Victor" is strongly encouraged to email me; you alternatively can connect on Twitter via @tvdvdguy.