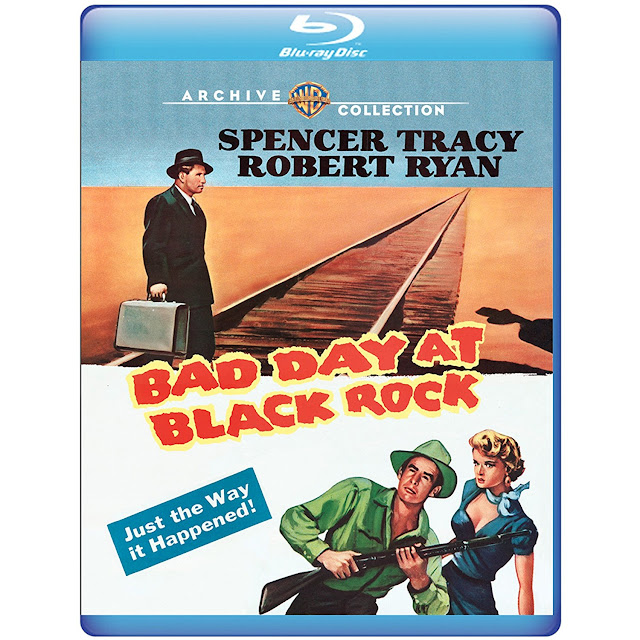 The fact that many people are unaware of the 1955 Oscar-nominated Spencer Tracy/Robert Ryan drama "Bad Day at Black Rock" and that a large percentage of that portion of the viewing public have an understandable (but misguided) prejudice against Westerns demonstrates that those poor starving bastards are wasting away while those of us in the know are feasting. The title of "Day" misleading suggests that that this under-rated drama about a small town facing exposure of a shameful secret is a tale of cowboys and Indians and/or outlaws.

On a larger level, folks who do not give oaters a chance miss out on discovering that most have them have much depth than merely being a series of saloon brawls, round ups and/or cattle stampedes, and/or high noon showdowns on deserted dusty main streets. Once again, Warner Archive plays the role of Calvary in riding in to release DVDs and Blu-rays of these films and shows. In this case, a January 2017 Archive Blu-ray of "Day" provides a chance to enlighten (and entertain) yourself.

The following YouTube clip of the "Day" trailer highlights the '50s drama look of the film, the star power of the cast, and the successful blending of Western and noir elements.


This CinemaScope presentation, which looks spectacular in Blu-ray, opens with a panoramic shot of a '50s-era train traveling through the Arizona desert and stopping at the titular isolated community. The dirt road, old-timey hotel, and other buildings provide a sense that time stands still in this corner of the Grand Canyon State. The sense that the locals seem ready to draw their guns on disabled WWII veteran John Macreedy (Tracy) based on his trifecta of "sins" in the forms of being a stranger in them thar parts, being the only person to have stepped off that train in that town in four years, and immediately asking about one-time local Japanese resident Komoko enhances the sense that we are back in Kansas.

This being the 1950s rather than the 1850s helps keep the innards of the very Tracy-like quiet but tough Macreedy intact. It does not prevent hotel clerk Pete Wirth (big blond character actor John Ericson) from asserting that there is no room at the seemingly very empty inn or local tough guy Hector David (Lee Marvin) from making himself comfortable in the room of Macreedy while he is washing up and confronting the latter on his return. Anyone who knows Tracy from his other roles know that this does not deter him from his 24-hour mission.

Ryan's large landowner Reno Smith takes a more direct approach to ridding Black Rock of the new threat to its tranquility. This leads to one of the most exciting scenes in this tense noirish drama.

The copious symbolism includes a one-armed bandit in the hotel lobby, a sheriff in his own jail cell, and both the nature of the quest of Macreedy and the reaction of the town on learning of it.

Although Macreedy hints about the nature of his inquiry and the locals indicate the fate of Komoko, the truth does not come out until near the end after blood has been shed, characters have had their patience tried, and collateral damage has been caused. The final moments being far from a Hollywood ending further makes this film from the Golden Age of Hollywood worth adding to your collection.

The special features include the entertaining theatrical trailer and commentary by film historian Dana Polan.

Anyone with questions or comments regarding "Day" is encouraged either to email me or to connect on Twitter via @tvdvdguy.