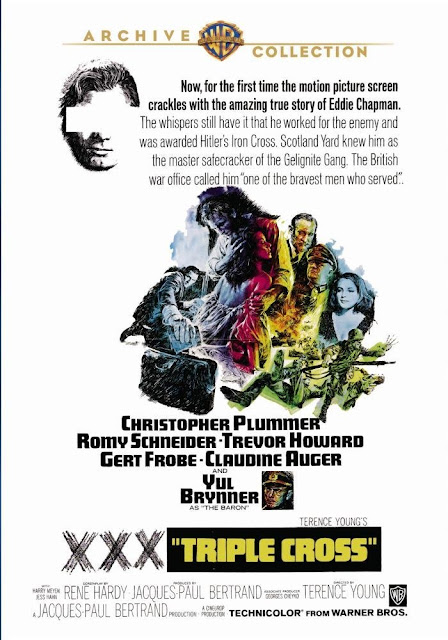 These thoughts on the November 2012 Warner Archive DVD release of the 1966 Christopher Plummer biopic of WWII espionage agent Eddie Chapman "Triple Cross" kicks off a Summer of 2017 Unreal TV series of reviews of aptly vintage Archive titles that figuratively have fallen through the cracks.

The following YouTube clip (courtesy of Archive) of a scene from "Cross" highlights some of the best elements of this thriller.


The similarities between "Cross" and the recent (Unreal TV reviewed) Archive Blu-ray release "36 Hours" provide a good starting point for discussing the former. Like Garner's Jeff Pike, Plummer's Chapman feeds the Nazis information that they wisely season with more than a grain of salt.

The suave Chapman is a skilled safecracker in the days right before WWII when he is captured and jailed. The impact of the war on him includes questioning in which he essentially declares that he does not care which side is victorious but that he wants to be on the winning team. Archive highlights this central theme by including the quote "I'd rather live for Germany than die for England" in the text on the back cover of the DVD. This sentiment is akin to those of a Nazi officer in "Hours" whose loyalties to his peers shifts according to who is in favor at the moment.

Chapman soon finds himself a guest of the fuhrer and enters a literal shotgun training program to become a German spy. The suaveness of the reel- and the real-life Chapman as well as the clever gadgets (not to mention the hot sophisticated babe) that Chapman is shown add a fun Bond element to "Cross."

Much of the well-executed fun of the film relates to ambiguity regarding the loyalty of Chapman. (The best guess is that it shifts according to which side is ahead at the moment.) A prime example of this is an instance in which it seems that Chapman is making a run for the border but changes his exit strategy on discovering that things are not as they seem.

Another good scene has Chapman making a bold move from inside the hornet's nest. This leads to a very suspenseful moment in which it seems that he is sure to be found out.

Anyone with questions or comments regarding "Cross" is encouraged either to email me or to connect on Twitter via @tvdvdguy.