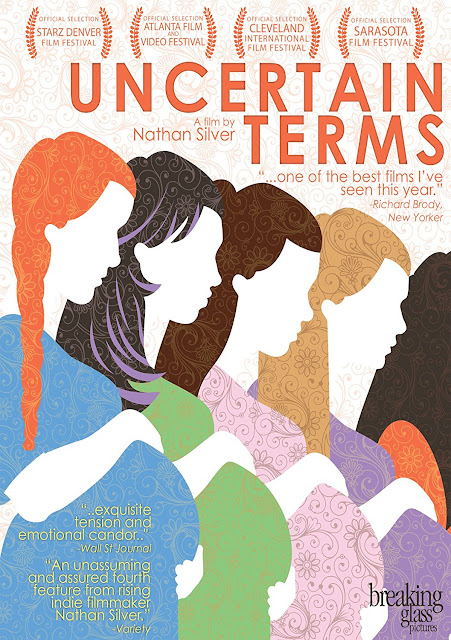 breaking glass pictures takes a break from its edgy and provocative fare regarding the DVD  release of the 2014 drama "Uncertain Terms." This film aptly is a kinder/gentler movie by writer director Nate Silver of the 2016 breaking (and Unreal TV reviewed) comedy "Actor Martinez" about the real-life adventures of a part-time actor and his collaborators.

One of the coolest things about "Terms" is that the grainy hand-held camera look and overall cinema verite documentary vibe (including very conversational style acting by every cast member) of it clearly influences the blurring of fiction and non-fiction in the similarly presented "Martinez." The Cliff Notes version of this one is that troubled 30 year-old Robbie forms a risky friendship with teen mom to-be Nina while visiting his Aunt Clara (cool nod to "Bewitched?") to escape his own woes.

The following YouTube clip of the "Terms" trailer reinforces the aforementioned style of the film and introduces the story without an abundance of spoilers.

We first meet Robbie as he approaches the rural home for unwed mothers that Aunt Clara operates for reasons that the audience soon learns extends beyond her earth mother peace, love, and understanding personality. She knows that the Brooklynite is there for two weeks to make himself useful; she does not know that he is having serious marital problems.

The five knocked-up teens in residence do not respond as strongly to the presence of a youngish man in their presence as one would expect. They largely ignore him and do not tease him when he participates in their activities.

The problems start when the slut of the group makes a failed clumsy attempt at seducing the new boy in the neighborhood who lives downstairs and is there to take care of them like he's one of the family. This complicates matters when Robbie makes good girl Nina who got into trouble the object of his affection.

Good humor comes in the form of K-Fed like white trash Nina baby daddy Chase being a regular fixture at the home. He always swaggers and makes one wonder how many times that his mother dropped him on his head while he was a baby but causes trouble when he goes from being a big kid to an abusive and threatening presence. His repeated use of the phrase "I need you to not be here right now" regarding Robbie in one scene is hilarious.

Meanwhile, Nina understandably bonds with the newcomer who shows her compassion and understanding. This leads to an unfortunate blurring of the line between friendship and felony. Throwing in the element of Robbie being made to feel valued and loved at a time that his wife is doing neither increases the drama regarding his relationship with this neo-modern Lolita.

Of course, things ultimately come to a head regarding both Chase and the wife of Robbie. This leads to our main characters at least being a little wiser even if they are no more happy then when Robbie first arrived.

Anyone with questions or comments regarding "Terms" is encouraged either to email me or to connect on Twitter via @tvdvdguy.