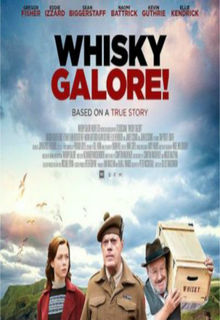 The May 12, 2017 theatrical release of the Arrow Films remake of the classic 1949 comedy "Whiskey Galore!" provides reason to hope for signs of intelligent life in the cineplex. At this point, only folks in Los Angeles and New York will get to see this smashing flick on the big screen; it is hoped that theater owners in other cities will expand this opportunity.

On a broad level, this beautifully shot and well-acted movie about the eccentric antics of the quirky residents of a small Scottish island evokes strong thoughts of similar fare of days of yore such as "The Englishman Who Went Up a Hill but Came Down A Mountain" and "Waking Ned Devine." This is a nice contrast to the modern formula of placing the matinee or teen-boy idol of the week in a film that relies on crude and/or slapstick humor.

The following YouTube clip of the "Whisky" trailer includes glimpses of several scenes that prove that the movie IS your father's (should be a) hit comedy.

The quaint old world setting this time is the small community of Todday. Although the year is 1943, the only impact of the war is the local pub running out of whisky and not having any hope of replenishing its supply any time soon. The lack of a more serious threat is not stopping the "Dad's Army" style local Home Guard officer Captain Waggett from maintaining road blocks and otherwise exercising undue diligence. Comic legend Eddie Izzard shows his entitlement to that honor in playing Waggett as a textbook self-righteous fool easily frustrated by the "incompetence" of subordinates and the absurd manner in which the military operates.

The daily life of Sam Druckeresque postmaster/shop keeper Macroon is being complicated by his youngest daughter and earnest school teacher George Campbell (whom Kevin Guthrie of "Fantastic Beasts and Where to Find Them" nails) wanting to get married despite the strong opposition of Mrs. Campbell, who is the mother of all mothers. The engagement of the older Macroon daughter to a soldier on leave is free of similar drama.

The conflict between the cold warring factions heats up when a ship that is transporting 50,000 cases of whisky (and a sensitive secret item) runs aground off the shore of Todday. Macroon and his troops want to salvage the titular beverage for their own use, and Waggett wants to obey the letter of the law. This results in highly entertaining mad dashes on the land and on the sea, as well as hilarious scenes of concealing whisky bottles.

One scene fully establishes that "Whisky" plays wonderful homage to the '60s American sitcom "Hogan's Heroes," which centers around the titular WWII POWs operating an underground railroad and a sabotage operation literally under the noses of a lazy Sargent and a highly gullible and greedy Commandant. The aforementioned scene is a true AHA moment in that Macroon asks an Army official to give Waggett a positive evaluation; Macroon explains that he does not want Waggett replaced by someone who would catch on to the sneaky doings on the island. This is (along with the numerous ruses directed at Waggett) is straight out of "Hogan."

The humor and the action in "Whisky" is so well presented throughout that the film does not climax so much as it winds down. Some characters are a little wiser, others emboldened, and most quite a bit drunker.

Anyone with questions or comments regarding "Whisky" is strongly encouraged either to email me or to connect on Twitter via @tvdvdguy.