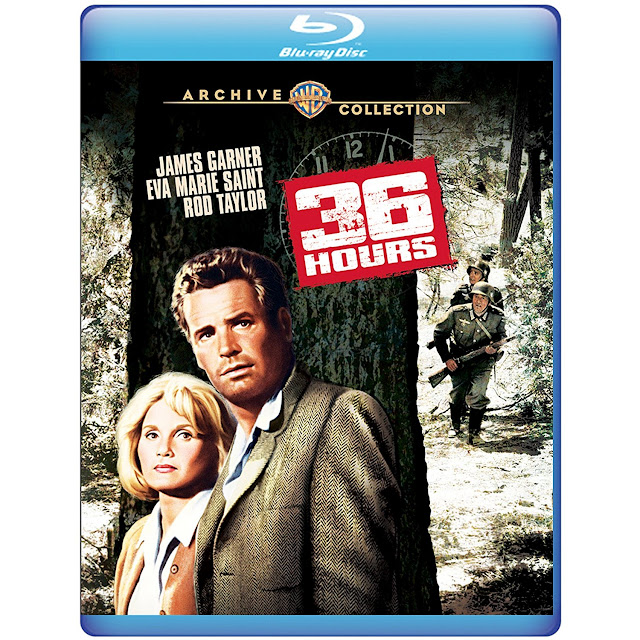 The Warner Archive April 11, 2017 Blu-ray release of the 1964 WWII-era thriller "36 Hours" solves the problem of finding a Father's Day gift that Dad will enjoy. Although he (and the rest of us) will come to the film looking forward to the roguish charm and sarcastic wit of star James Garner, the film delivers so much more. Two other "TV Land" show stars joining "The Rockford Files" lead Garner is a nice bonus.

The YouTube clip below of the (spoiler-containing) "Hours" trailer includes a good primer on the plot and a whole lotta Garner. The narrator sounding so much like Rod Serling that he may be him further adds to the surreal vibe of this promo.


The most unexpected element in this film bursting with surprises is that this tale about concentration camps and Nazi interrogation tactics is based on a story by children's author Roald Dahl. Then again "Hours" director/screen writer is "Miracle on 34th Street" writer George Seaton.

Garner plays U.S. Army Major Jefferson "Jeff" Pike, who is spending the war as an England-based intelligence officer. Seeing Alan Napier of '66 "Batman," which is the subject of an Unreal TV essay, fame as the commanding officer/friend of Pike is one of the aforementioned "TV Land" surprises in "Hours."

Pike is among the few people in the world with detailed knowledge of the 1944 D-Day invasion that is scheduled to commence in a few days. The latest mission that he chooses to accept is to gather more information regarding the extent of the knowledge of the Germans regarding that event. An interesting element of these early scenes is a moment of foreshadowing that anyone who has ever watched a "Scooby-Doo" program or film should note.

Knowing the value of Pike as an information source, the Germans grab him while he is on his mission and transport him to a faux U.S. Army hospital that the Nazis use for situations such as this. One difference is that the stakes are much higher this time.

The bill of goods that the Nazis go to extraordinary lengths to sell Pike is that it is 1950, that the Allies have won the war, and that he is in the hospital because of recurring bouts of amnesia. Nazi Major Walter Gerber (whom Rod Taylor seems born to portray) poses as the American doctor who is treating Pike. The basis for the ruse is that Pike recalling everything that he knows about D-Day is an important element of his recovery.

Another element of this plan is to have German nurse with a tragic past Anna (regarding whom Eva Marie Saint shows that she can more than keep up with the boys) convince Pike that they have a close relationship and that he can trust her with all his secrets. A Saint monologue on the nature of concentration camps is award worthy.

The titular time frame is one of many elements of suspense in "Hours." It provides the deadline that Gerber faces before his colleagues who have more unpleasant means of making someone talk get a crack at Pike. An interrogation in which the Germans are making progress provides an even more "Scooby" caliber moment regarding the reaction of "company man" Otto Schack on hearing Gerber discuss the downfall of the upper echelon Nazis.

All of the related moving parts contribute further suspense regarding whether Pike falls for the trick and whether he has inadvertent loose lips. The Nazis still must judge any provided information in the uncertain context of whether Pike gives it knowing that he is the victim of a hoax. The Nazis further must evaluate whether any provided information seems plausible.

An additional great aspect of "Hours" is putting human faces on the three main Nazis in the film; this truly shows that they are not much different than us. We learn that the work of Gerber has more noble roots than an interrogation technique; that the war has turned Anna into someone whom she never thought that she would be but is fine with, and that being on the winning team is the primary objective of Schack.

John Banner of the soon-to-be WWII POW camp sitcom "Hogan's Heroes" playing a Schultz-like Sergeant in the Home Guard rounds out the trio of "TV Land" types in "Hours." Ernst in the film is looking out for Ernst in manners that include looking the other way and otherwise abetting activities that are detrimental to the Third Reich if the price is right.

All of the above being presented in a largely unsentimental manner should make Dad's day. The rest of can just be grateful that watching "Hours" provides an alternative to suffering through a family barbecue.

Anyone with questions or comments regarding "Hours" is encouraged to email me; you also can connect on Twitter via @tvdvdguy.