'One Kiss' DVD: Two Guys, A Girl, and a Pizza Place 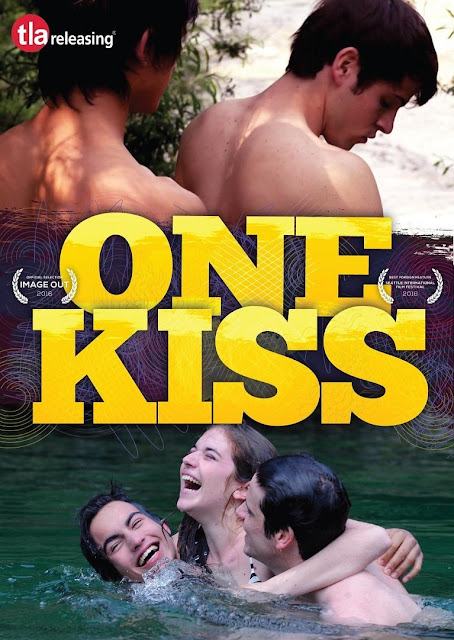 The tla releasing DVD of the 2016 teen-oriented gay-themed Italian drama "One Kiss" provides a great context for related discussions of Gay Pride and of tla releases of similar art-house fair. This largely comes in the context of "Kiss" being the one of the at least 50 Unreal TV reviewed tla films that has a message that this site considers inappropriate. The result of the related soul searching is that one negative element among many positive ones does not warrant condemning a film.

The criticism of "Kiss" relates to the response to an unwelcome homosexual advance. The realistically harsh rejection triggers events that lead to heartbreak and more serious tragedy. That domino effect sends a not-so-great message but is an important cautionary tale to a gay teen who consider making a move on an object of his affection who may not even be gay and who has sent signals that he just is not that into you even if he does like boys.

The real problem relates to a later development that creates a parallel universe in which the rejection of the overture is much more sensitive and everyone lives happily ever after. The problem is not that this is more unrealistic than the outcome in several tla films in which even a boy who likes other boys but is coming to terms with this lustfully kisses the friend with a previously unrequited love on that bro finally going for it. The problem is that "Kiss" puts all the blame for the horrific act that ruins at least two lives on the object of the affection when the real lesson that the gay boy who rightfully is not ashamed of his sexuality should acknowledge is that pushing hard can provoke hateful responses.

The following YouTube clip of the SPOILER-LADEN trailer for "Kiss" provides brief looks at the above-mentioned themes.

All this drama commences when new gay boy in town Lorenzo makes a flamboyant debut at his new school; a shouted insult disrupts the fantasy of Lorenzo that his peers immediately embrace his fabulousness. This Secret Life of Walter Mitty element reoccurs in other scenes in which Lorenzo imagines that every student who has been mean to him gathers below his bedroom balcony to make a big show of apologizing and in which an adult Lorenzo is being interviewed on television.

A not-so-nice teacher of Lorenzo pairing him with fellow outcast Blu, who is on the outs with the in crowd after she has sex with her stud boyfriend and three of his friends, sets the stage for these two pariahs to form a beautiful friendship.

Meanwhile the "Ordinary People" style problems of basketball star Antonio is making his high school experience miserable. The accidental death of the more popular brother of Antonio is causing this boy to be very reclusive in a crowd and to engage in his own fantasies in the form of conversations with his deceased sibling.

Our two guys and a girl become a trio one night when Antonio accepts an invitation to join the other two at a local pizza parlor. Lorenzo and Blu striving to get Antonio the wallflower to loosen up sets the dynamic from the start.

Although the rest of the school largely is content with leaving Blu and the boys alone, Lorenzo ignoring loud-and-clear messages that merely toning down the self-described fabulousness and related fierceeness of this boy raised on "Glee" and Lady Gaga would do everyone a world of good creates problems that arguably lead to the aforementioned unhappy ending.

Not content to let sleeping jocks lie, Lorenzo enthusiastically recruits a hesitant Blu and a much more reluctant Antonio to assist with a full-frontal assault on the teen powerbrokers at their school. This arguably disproportionate act leads to social suicide with extreme prejudice.

All of the above leads to the well-staged titular smooch, which ties nicely into several themes of "Kiss." This brief encounter leading to a ripped-from-the-headlines incident is just one of several examples in the film of needing to tread lightly regarding the emotions of teens.

"Kiss" further illustrates the challenges that every teen faces; the cruel joke of nature in the form of giving adolescents bodies that their psyches (and the judgments of their callous peers) cannot handle makes it a very rough period. The overall positive development of a gay boy having relatively broad freedom to express himself (so long as he does not cross the invisible line) further complicates matters.

The wrap up of this "very special" "Afterschool Special" Unreal TV post is that the complexity and the delicacy of the topics that "Kiss" tackles requires equal care in portraying the story.

Anyone with any questions or comments regarding "Kiss" is encouraged to email me; you also can connect on Twitter via @tvdvdguy.