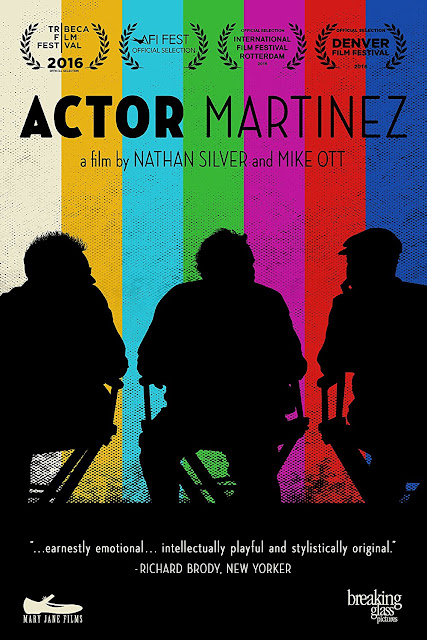 The seemingly endless stream of quality gay-themed art-house theatrical and DVD releases from breaking glass pictures nicely set the stage for the April 4, 2017 DVD release of "Actor Martinez" following a theatrical run that included screenings at the Tribeca and the Denver Film Festivals. Both the cynical and oft-depressed persona of the titular Denver thespian/freelance tech. guy and this meta production being about his daily life essentially make this film a successful effort to produce "Louie: The Movie."

The following YouTube clip of the "Martinez" trailer blurring the lines between fiction and reality highlights the same well-executed theme in the film. Seeing both perspectives provides the trademark breaking edge.


"Martinez" opens with the intense frustration of Martinez and reel and real-life writers and directors Mike Ott and Silver regarding making a film in which Martinez plays a fictional character leading to making a film about the real life of the fictionalized Martinez. Confused? You won't be after watching "Martinez."

Much of the wonderfully sadistic entertainment stems from Silver and Ott being a Greek chorus commenting on the daily life of their subject and (ala "The Truman Show") manipulating events to the benefit of the audience and the detriment of the real-life Martinez. An impure motive for hiring real-life actress Lindsay Burdge to play "Lindsay" in the film is the best (and the most hilarious) example of purposefully wreaking havoc for the sake of the art.

Martinez and Lindsay literally and figuratively following the script awesomely parallels the '80s sitcom "Joanie Loves Chachi" failing for reasons that include Joanie stopping loving Chachi during the run of this series. (On a real-life note, making this comparison pre-dates the death of Joanie portrayor Erin Moran.)

Silver and Ott take a page from the book of an even greater comic genius than "Joanie" producer Garry Marshall in paying homage to Mel Brooks by ending "Martinez" in a manner that blurs the lines between reel and real life even more than "Blazing Saddles." The big difference is that "Martinez" requires more thought regarding what is really real.

"Martinez," which also earns a comparison to the very surreal 1999 comedy "Being John Malkovich," succeeds for keeping both "reel" and "real" life believable. Martinez simply goes about fixing computers and discussing "shop" with Silver and Ott with realistic amounts of emotion. Further, the poor guy has low moments of his life recorded without his direct knowledge and experiences having that footage shown with limited consent.

The proverbially larger level this time extends beyond this era in which cities debate installing surveillance cameras that peer into homes and multiple cell phone cameras record every instance of someone being dragged down the aisle of a plane with his shirt hiked above his huge gut. For as long as sporting events and other public activities have been recorded, folks have had their mugs plastered across television screens without much say in the matter.

The blend of reel and real-life extends to the special features in the film. The auteur short film that breaking provides this time is "Riot" by Silver. Silver intersperses footage of the 1992 Los Angeles riots with home movies of his eighth or ninth birthday party that coincides with that event. The scenes of Silver and his pals running around shooting toy guns at each other provides better commentary than any other riot-based film.

Anyone with questions or comments regarding "Martinez" is encouraged either to email me or to connect on Twitter via @tvdvdguy.