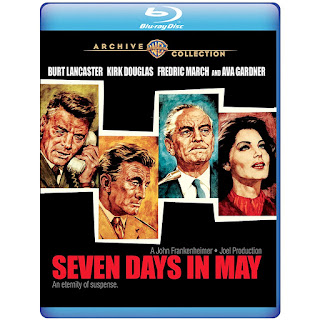 The Warner Archive May 2, 2017 Blu-ray release of the 1964 John Frankenheimer (of "The Manchurian Candidate" fame) political thriller timely shows the potential for art to imitate life in 2017. Having "Twilight Zone" driving force Rod Serling as the screenwriter greatly enhances this behind-the-camera cred.

The suspected vast right-wing conspiracy this time is that Joint Chiefs of Staff Chairman General James Scott (an awesome Burt Lancaster) literally and figuratively is amassing the troops to take down President Jordan Lyman. This choice of name for the Commander-in-Chief and Hollywood royalty Frederic March looking and acting very much like then real-life POTUS Lyndon Johnson contribute to the realism of this film.

The following YouTube clip of the SPOILER-LADEN "Days" trailer concisely lays out the plot and provides a sense of the build-up of tension during the titular week. The not-so-great picture and sound of this promo. demonstrates the good job of Archive regarding remastering the film and presenting it in Blu-ray.


The known impetus for the possible plans for a coup d'etat is that Lyman is on the brink of entering a monumentally game-changing treaty with the Russians. Frankheimer establishes the intense feelings of the American public regarding this in opening scenes of clashing pro and con demonstrators marching (no pun intended) in front of the White House. The fact that Lyman has an approval rating of 29 percent (imagine that!) indicates that the better dead than red folks outnumber those who advocate giving peace a chance.

The man in the middle of all this is "meddling kid" Col. Martin "Jiggs" Casey, which is a perfect role for upright and honorable Kirk Douglas. An odd off-hand remark by a loose-lipped junior officer leads to other circumstantial evidence that leads to Casey taking the bold step of requesting an emergency private meeting with Lyman.

Lyman and his kitchen cabinet of most trusted advisers then meet to determine the best course of action. (Fans of "Psycho" and/or the "All in the Family" spin-off "Archie Bunker's Place" will delight in seeing Martin Balsam as presidential aide Paul Girard.)  The group decides to trust but verify in the form of Lyman sending these supporters out to check out the various indications of the alleged imminent effort of Scott to circumvent the electoral process.

The investigation involves sending Girard to meet the one member of the Joint Chiefs who is believed to not be in on the plot; Casey goes to meet with the scorned former lover (whom former Mrs. Mickey Rooney and Mrs. Frank Sinatra Ava Gardner understands well) of Scott who is believed to have relevant information. Loyal but stereotypically alcoholic and lazy Georgia Senator Clark (Edmond O'Brien gets the praise for this one) goes to find a suspected covert military base in the Texas desert.

The suspense builds as the credible evidence of the coup increases, Scott responds to that development, and the date of the military exercise around which the coup is centered approaches. As Lyman states, he losing his job is less of a concern than the possibility of  the American democratic system falling apart.

Cinephiles who are familiar with "Candidate" and other Frankenheimer dramas know that he is skilled at building the aforementioned tension and the drama. He takes things to the brink and how they work out is anyone's guess. One spoiler is that either a literal or a figurative smoking gun plays a major (no pun intended) in the outcome. One unnervingly believable element of every aspect of the film is that all the action occurs under the noses of a blissfully unsuspecting public.

Anyone with questions or comments regarding "Days" is encouraged to email me; you also can connect on Twitter via @tvdvdguy.