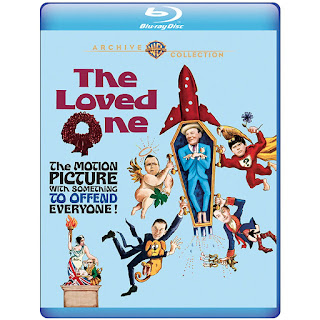 The tagline "The motion picture with something to offend everyone" for the 1965 new wave cinema comedy "The Loved One" by English director Tony Richardson (father of Natasha and Joely) should be enough to make anyone want to purchase the recent Warner Archive Blu-ray release of the film. Watching this adaptation of the Evelyn Waugh novel of the same name validates that claim, should delight every fan of "Dr. Strangelove," and verifies that you chose wisely.

The following YouTube clip of the spoilericious theatrical trailer wonderfully mashes up "Benny Hill" and "Monty Python" to provide a sense of the way cool style of this film that you will not want to watch with your parents or a first date.


Star Robert Morse (also of the Unreal TV reviewed "Hello Dolly" Archive film without the singing and dancing "The Matchmaker") puts his talent for playing a naive awkward manboy to good use in portraying "Loved" lead Dennis Barlow. The film opens with this English innocent going abroad to live in America in much the same way that early immigrants to our fair shores opt for that relocation as the only option for avoiding prison in the U.K.

Barlow surprising his uncle Sir Francis Hinsley (Sir John Gielgud of numerous substantial roles and best known for playing a butler in "Arthur") sets the stage (no pun intended) for the hilarious satire of the film industry that evokes thoughts of the (recently reviewed) 1981 Blake Edwards comedy "S.O.B." The scads of Hollywood (and London) royalty who appear in "Loved" is another common element with the Edwards film.

The studio connection is that Hinsley is an artist with a decades-long career providing prop paintings for a studio; Barlow arrives during a meeting in which Jonathon Winters' Henry Glenworthy is trying to convince studio executive/son of studio head D.J., Jr. (Roddy McDowall) and other "suits" to cast rough-around-the-edges Texan matinee idol Dusty Acres as an English nobleman in an upcoming film; the role of Hinsley includes playing Henry Higgins to this Eliza Dolittle.

Hinsley reluctantly agrees to take in his nephew and soon shows a lack of hospitality that is akin (pun intended) of the manner in which pretentious American women living in London great their American cousins. An example of this is a friend of your not-so-humble reviewer calling a London-dwelling relative whose filmography includes a minor '60scom only to have her refuse to see him and to instruct him to write ahead the next time.

A turn of events shifts the action from the studio system to the funeral business racket; Winters also using his special talents to ideal use in playing Rev. Wilbur Glenworthy facilitates this transition. Barlow remains the center as an employee of the pet section of the enormous and diverse Whispering Glades cemetery/funeral parlor. This additionally facilitates this aspiring young poet to woe his love interest, whose responsibilities include contributing a female touch to the embalming activities of the business.

Rod Steiger steals several scenes and provides much of the aforementioned offense as freakishly odd mortician/momma's boy Mr. Joyboy. Genuinely grotesque Mrs. Joyboy holds her own with her son.

A notable cameo from this portion of the film is by dreamy Tab Hunter (whose 2015 Unreal TV interview shows that he is the most gracious man alive). This man with the looks and the manner of the all-American boy next door shines as an enthusiastic and sincere Whispering Glades tour guide.

Another "special appearance" highlight has Liberace effectively playing Liberace as a salesman presenting coffins at the funeral home.

This second half of the film really takes off when teen rocket enthusiast Gunther Fry (singer/songwriter/actor Paul Williams) comes on the scene. This arrival aptly seems like a gift from Heaven for Whispering Glades.

A good "TV Land" subplot has Lionel Stander of "Hart to Hart" play a crude and callous newspaper advice columnist; Bernie Koppell of "Get Smart" and "The Love Boat" plays his more grounded assistant. Reta Shaw of "Bewitched" and "The Ghost and Mrs. Muir" adds to the fun in a cameo unrelated to the Stander and Kopell.

A wonderful 15-minute documentary on "Loved" provides great perspective on the film. Morse, Williams, and cinematographer Haskell Wexler offer fascinating insights into this comedy that they discuss fulfilling its claim to offend all. Highlights include Morse and Williams recalling reading the Waugh novel before there were any thoughts of making the film.

Anyone with questions or comments regarding "Loved" is strongly encouraged to email me; you also can connect on Twitter via @tvdvdguy.