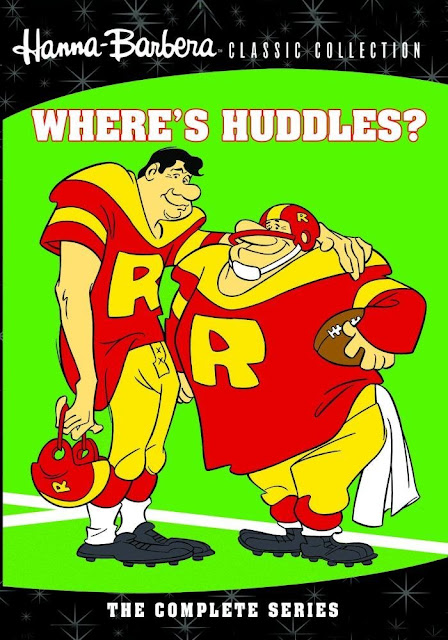 [EDITOR'S NOTE: The DVD release of the Hanna-Barbera "lost series" "Where's Huddles" finding its way into the Unreal TV DVD collection in May 2017 nicely coincides with the (Unreal TV reviewed) "Hanna-Barbera: The Architects of Saturday Morning" exhibit that is running at the Norman Rockwell Museum in Stockbridge, Massachusetts. That extensive display, which runs through May 29 2017, pays even more homage to HB than (as demonstrated below) "Huddles."]

Warner Archive once again digs deep into the Hanna-Barbera (HB) vault regarding the DVD release of the complete series of the 1970 CBS prime time summer series "Where's Huddles?" The Archive awesomeness this time relates to "Huddles" incorporating scads of the best elements of classic HB series. The underlying war of the neighbors adds a dose of real-life to this animated world.

The following YouTube clip of the "Huddles" opening showcases most of the HB references that comprise most of this review.


The accurate comparisons between "Huddles" and the '60s HB classic "The Flintstones" that are obligatory for any discussion of the former are only the tip of the iceberg. Modern neanderthal/quarterback Ed Huddles is best friends with even denser short and stout neighbor/teammate Bubba McCoy, whom vocieover actor Mel Blanc makes sound like his very similar Barney Rubble of "Flintstones." Further, Chez Huddles is a scaled-down football stadium inside and out.

The primary differences between The Flintstone clan (and the clones that include "The Jetsons" and the (Unreal TV reviewed) "The Roman Holidays") and the '70s middle-America Huddles family is that the Huddles and their friends enjoy an existence that largely is the same as any other '70s American family. None of the football-themed elements of the Huddles lifestyle are anything that someone with enough money and inclination could not acquire. Further, all the appliances and modern conveniences are just that, rather than repurposed animals or other resources of the era.

Other common elements with "The Flintstones" are that the Huddles have a cute baby girl named PomPom and a helmet-wearing dog named Fumbles. The McCoys are childless, but it seems inevitable that a later season would have brought them a super-strong baby boy.

"Flintstones" veterans in addition to Blanc include Jean "Wilma" Vander Pyl as Huddles spouse Marge and Alan "Fred" Reed as the coach of Huddle's team.

These similarities extend to the first episode of "Huddles" having virtually the same plot as the "Flintstones" pilot. Both episodes revolve around the central neighbors/best friends becoming openly warring enemies after jointly investing in a swimming pool.

The next "Huddles" episode also pays a direct homage by centering around Bubba (like the portly Fred) having to go on a diet. The "Flintstones"/"Honeymooners" vibe also is particularly strong in an episode in which hilarity ensues after Ed finds money that Marge has been saving for his birthday gift. The only thing missing is Ed/Fred/Ralph telling Marge/Wilma/Alice that he is a heel/bum.

Snickering and muttering hound Muttley/Mumbly voicer Don Messick using similar vocalizations to bring Fumbles to life illustrates (pun intended) the broader HB elements of  "Huddles." Other aspects are Marge Huddles looking similar to Josie of the HB cartoon "Josie and the Pussycats" and McCoy spouse Penny looking even more like Melanie from "Josie."

"Huddles" ventures further into HB territory via equally vicious attacks by Pertwee's cat Beverly and Fumbles directed at each other. This directly coincides with the playbook that dictates the interaction between Boo the cat and Elmo the dog on the "Scooby" clone "The Funky Phantom."

On a larger level, "Huddles" is about the ongoing open battle between our jocks and their prissy attorney neighbor Claude Pertwee, whom Paul Lynde wonderfully snidely brings to life in the same manner that he voices "The Perils of Penelope Pitstop" villain The Hooded Claw/Sylvester Sneekly and a few other HB roles. Early plots have our boys covertly building the pool in response to Pertwee trying to block that project, Pertwee trying to sabotage the aforementioned diet for his own selfish purpose, and the old fix-the-car before the mean owner returns plot.

The vast majority of us who have either been the slobs or the snobs in a relationship such as the one among the pro athletes and the legal eagle next door can relate to the animosity between them being so strong that they do not even try to hold their punches. Our current dystopian times and the readiness of neighbors to involve the criminal or the legal system in the dispute only exacerbates such situations.

The post-game analysis of all this is that Hanna and Barbera score a touchdown regarding setting a "Flintstones" clone that also honors several other HB classics in our world.

Anyone with questions or comments regarding "Huddles" is encouraged to email me; you also can connect on Twitter via @tvdvdguy.