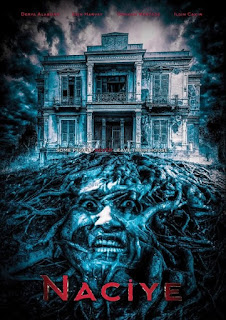 Shami Media Group provides renters of summer vacation homes everywhere reason to fear regarding the April 11, 2017 VOD/DVD releases of the 2015 Turkish Gothic thriller "Naciye." Writer/director Lutfu Emre Cicek takes a cue from Hitchcock in moving the terror from the run-down mansion at the top of the hill to the well-maintained three-bedroom closer to Main Street.

The following YouTube clip of the "Naciye" trailer offers a nice glimpse of the creepy suspense in the film.


Cicek pays homage to modern filmmaking in having the action in this film about the titular resident psycho shift several decades to fill in the blanks. The central concept is not-so-glowing pregnant Bengi and more enthusiastic daddy-to-be Bertan arrive at a babymoon house on the Princess Islands off the Turkish coast to find indications that someone is living in that rented abode. The couple soon learns that the clothes hanging in the closet are the least of their problems.

The audience knows before Naciye begins terrorizing the yuppies that she believes that the house is hers and will not give up it without copious bloodshed. The flashbacks during the cat-and-mouse scenes establish the events behind this mania. As typically is the case, Mom is the culprit behind the anti-social behavior of the sharp-instrument wielding maniac. The psycho in this one takes not wanting "that slut" in her house to an extreme degree.

The bigger picture is that the family trauma that sets the present-day mayhem in motion involves very icky aspects that continue to the scrambling, door pounding, and flights up stairs that plague our vacationers. Psychiatrists who say that the causes of such destruction are relative know that of which they speak.

Many of the chills relate to the "it could happen to me" element of the concept of someone with issues invading a vacation home. The turnaround in such places is so heavy that you often do not know the history of the place or who has stayed there before you. Folks familiar with finding a used birth control device in the sheets or dirty underwear under the bed understand this well.

Anyone with questions or comments regarding "Naciye" is welcome to email me; you also can connect on Twitter via @tvdvdguy.