'Alena' DVD: Nordic Noir Mash-up of "Heathers' and 'The Facts of Life' 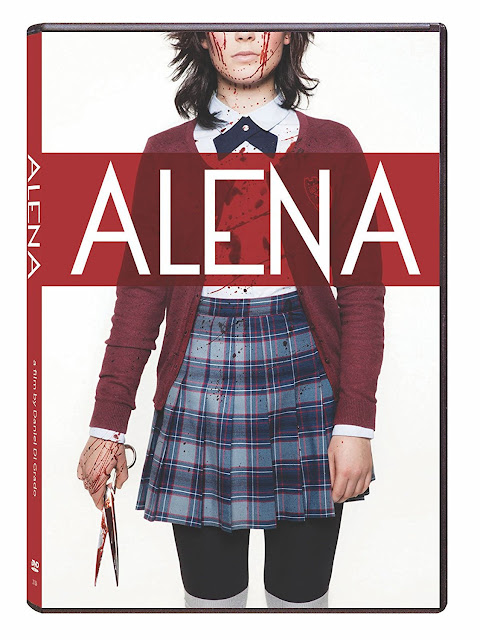 The May 9. 2017 DVD release of the 2015 Swedish drama "Alena" is the latest example of the glory that is the Icarus Films expansion beyond distributing "innovative and provocative documentary films." This live-action tale, which is based on a graphic novel by Kim W. Anderson, of the new girl in school having major adjustment issues is an awesome combination of the 1988 mother of all "Mean Girls" films "Heathers" and the '80s sitcom "The Facts of Life."  A vicious croquet game is the most direct homage to "Heathers" and "Alena" blonde queen bee Filippa starting a spiteful rumor that a classmate is a lesbian is straight (no pun intended) out of "Facts."

The following YouTube clip of an "Alena" trailer achieves its goal of conveying the style and the intensity of this well-made film.

"Alena" commences with the titular version of Bronx scholarship girl Jo of "Facts" enrolling in the Eastland Schoolesque prestigious girls' academy in the wake of an unspecified event that prevents her from remaining at her public school. This transition comes courtesy of a highly sympathetic school counselor whom Alena considers a savior but is a "pregnant cow" in the eyes of Filippa.

The mere presence of Alena at the school is enough to trigger the ire of Filippa; expressing interest in joining the lacrosse team that "Blair" rules with an iron fist earns the new girl a lacrosse ball in the back. This leads to more intense torment with a perverse sexual element.

"Heathers" style eye-for-an-eye retribution comes via public school bestie Josefin, whose tactics also VERY APTLY earn her the title of being the worst enemy of Alena. More positive support comes in the form of an increasingly close friendship with new classmate Fabienne.

Filippa becoming the Wile E. Coyote of our high school drama only drives her closer to the edge of insanity to the degree that her sense that times are desperate provoke desperate measures. This only further enrages Josefin and has a proportional impact on Alena.

Concurrent related drama comes in the form of reveals regarding both the reason for Alena leaving her high school and the role of Josefin regarding that development. This adds the element of all good films that there is my story, your story, and the truth.

All of this comes to a head on the night of big party in a manner that throws an element of "Carrie" in the mix. Suffice it to say that Filippa might as well have dumped a bucket of pig blood on the head of Alena.

"Alena" gets As regarding the test for foreign films; it has relatable universal themes and could have been shot word-for-word and scene-for-scene in the United States. It additionally realizes that not every movie must have a Hollywood ending.

Anyone with questions or comments regarding "Alena" is encouraged to email me; you also can connect on Twitter via @tvdvdguy.