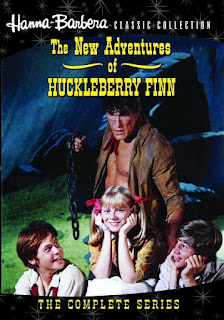 A guilty pleasure regarding reviewing the Warner Archive June 2016 3-disc complete series DVD set of the Hanna-Barbera (HB) primetime children's show "The New Adventures of Huckleberry Finn" is the chance to put a claim of being a pioneer in its place. The target is the Robert Zemeckis film "Who Framed Roger Rabbit." "Huck" constantly mixed live-action and animation 20 years before Zemeckis asserted that innovation as a claim to fame. For that matter, cartoon cat-and-mouse duo (and Hanna and Barbera creation) Tom and Jerry separately dancing with Gene Kelly and Ethel Merman predates "Huck" by several years.

Learning that "Huck" begins life in the Sunday night 7:00 p.m. slot on NBC, rather than on the "The Banana Splits" series that is a special after-school show for many children of the '70s, surprises most Gen Xers. "Huck" being a genuine pioneer in that it is the first weekly series to regularly have live-action actors interact with animated characters is less surprising but equally interesting.

Each episode of "Huck" commences with the highly addictive theme song that appears in the YouTube clip below. The episode then shows the same (included) introduction that shows how (ala the C.S. Lewis classic book "The Lion, the Witch, and the Wardrobe") our heroes Huck Finn, Tom Sawyer, and Becky Thatcher of Mark Twain lore flee into an enchanted cave to escape the wrath of escaped prisoner Injun Joe.


In a mix of the 1960s Irwin Allen scifi series "The Time Tunnel" and the '70s fully animated HB series "Josie and the Pussycats," each "Huck" episode goes on to show our intrepid trio arriving in an animated world on their quest to return to Hannibal. They next have one of the titular escapades and then continue their quest to return home. Each child actor seeming to believe that the animated world and the individuals who inhabit it are real nicely sells the premises and helps even adult viewers believe in fairies. Part of this magic is buying that the current animated threat to one or more of our leads is real.

Another common element is that the primary animated big bad of each episode looks and sounds like Injun Joe, whom Ted Cassidy of "The Addams Family" awesomely portrays. Becky and the boys note this and do not understand it but just go with the flow.

The pilot episode is one of the most bizarre of this surreal series. Our gang meets a tribe of leprechauns who initially are hunting for a misplaced magic shillelagh that is the source of their power. The oddness enters in the form of a group of gypsies capturing Huck and Tom on arriving on the scene and forcing this pair to help them acquire the enchanted club. Meanwhile, Becky is helping the wee folks either recover or hold onto that important item.

The third episode in the series is another form of pioneer undertaking in that it is a variation of the cross-over technique that is unusual (or perhaps otherwise unheard of) for the era.

Our heroes aptly are on a raft on an ocean in the middle of a storm and wash up on a shore of Lilliput, where the inhabitants are not much bigger than the titular hero of the HB Saturday morning series "Inch High Private High." Tom and Becky escape capture this time, but Huck initially finds himself strapped down ala Gulliver of both the Jonathon Swift tale and the HB 1968-69 fully animated Saturday morning series "The Adventure of Gulliver." (The aforementioned children of the '70s know that "Huck" and "Gulliver" reunite as companion segments on the aforementioned syndicated version of "Splits." Huck soon buys his freedom in the form of agreeing to a shotgun mixed marriage.

Size matters again in a late-season episode that parallels the live-action Krofft series "Dr. Shrinker" a decade later. Our Missouri natives take shelter in the spooky castle of a mad scientist only to end up with Huck being shrunk to Lilliputian size and his friends trying to find him and restore him to his normal dimensions.

The season (and series) finale borrows from another classic Twain tale. Huck once again is the primarily endangered member of the group. This pauper gets into this trouble when his exchanging clothes with the monarch of the underwater kingdom of Atlantis gets Finn in a great deal of trouble under the sea. The underlying effort to pull off a coup d'etat in this setting evokes thoughts of the HB '70s series "Jabberjaw."

The tie for most notable aspect of "Huck" is between the creative format and the fact that the concept encourages the sofa spuds who watch it to read the works of Twain.

Anyone with questions or comments regarding "Huck" is strongly encouraged either to email me or to connect on Twitter via @tvdvdguy.