'Such Good People' DVD: Not Another Gay Comic Caper Movie 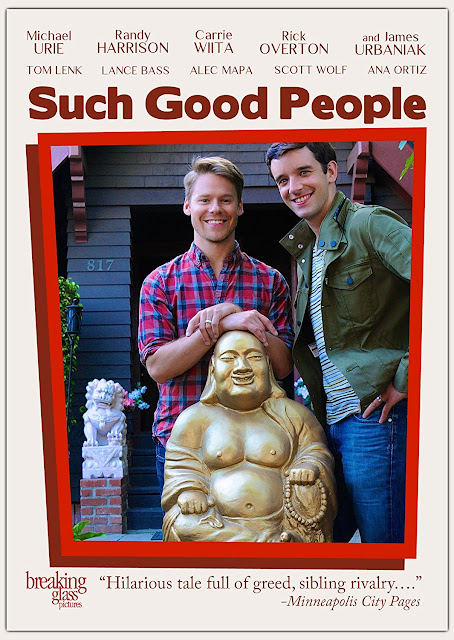 The breaking glass pictures DVD release of the 2014 screwball comedy "Such Good People" is a prime example of the numerous breaking films that show that gay-themed movies can be as mainstream as productions that center around straight people. The most prominent instance of this is the group of breaking "one who got away" films, which include the (Unreal TV reviewed) "Lazy Eye" and the (also covered) "Retake." As previously mentioned in this space, this effort earns breaking founders Rich Wolff and Richard Ross Grand Marshal honors at any Pride parade anywhere in the world.

Harrison plays (not very hairy) potter Alex, who is married to event planner Richard. Just as Alex is a toned-down version of Harrison's twink Justin on "Queer," "Ugly Betty" vet Michael Urie portrays Richard as an understated version of his character on that series.

The following YouTube clip of the "Good" trailer provides a good sense of the film by balancing the screwball and the gay aspects of it. It also chooses wisely regarding including glimpses of most of the best scenes in the movie.

Our apartment-dwelling boys are spending their leisure time driving around looking at the types of homes they aspire to own one day when they discover a large party occurring at one such mid-century abode. The first bit of the karma/destiny that is a major theme in the film is that the boys decide to crash the event on seeing that Alex's despised half-sister Paige and her husband Cooper are in attendance. Anyone with a "Daddy's girl" sibling who always has enjoyed most-favored nation status while Daddy has treated us like a third-world country with no valuable natural resources can relate to the Alex/Paige dynamic. This relationship/rivalry continues having a central role throughout "People."

On meeting homeowner/realtor/philanthropist/? Jake (whom "Party of Fiver" vet Scott Wolff portrays well) and  Chloe Jones, our boys experience another case of fate that leads to their house sitting and caring for the aforementioned dogs while the Joneses are on one of their regular trips to the Himalayans to help the orphans of Bhutan.

Soon after (temporarily) moving into their dream house, Alex and Richard discover a secret room where almost $1M in cash is hidden. Being told soon after making that find that Jake and Chloe died in a freak accident and did not leave any heirs prompt our boys to take the money and run. Their initial efforts to use the money in the manner that they believe that the recently deceased "such good people" would desire leads to justify using the found loot to buy the house. The motivations for doing so include that Paige and Cooper also want to make that purchase.

The hilarity that ensues include encounters with grand larceny scene-stealer/gay icon Lance Bass as the hyper-enthusiastic head of a porpoise charity, Urie "Betty" co-star Ana Ortiz as a tough police detective investigating the crimes centering around our leads, and a perversely hilarious dognapping. Those of us who have experienced the panic of a deeply loved "baby" going missing can relate to the hysterical reaction of Alex on finding that the labradoodles have been grabbed.

Arguably, karma prevails regarding the neo-West Hollywood ending that Barrett delivers. The best news regarding all this is that neither Zoey nor any other labradoodles are harmed in the making of this film.

The "Such Good Deleted Scenes" and "Such Good Bloopers" that the DVD special features greatly enhance an already fun film. A highlight of the former is Ortiz's detective holding a press conference after putting out an alert in response to being told of the grabbing of the dog; a great theme in the latter is Urie experiencing great frustration regarding the car that he and Harrison own in the film.

Anyone with questions or comments regarding "People" is encouraged to email me; you also can connect on Twitter via @tvdvdguy.