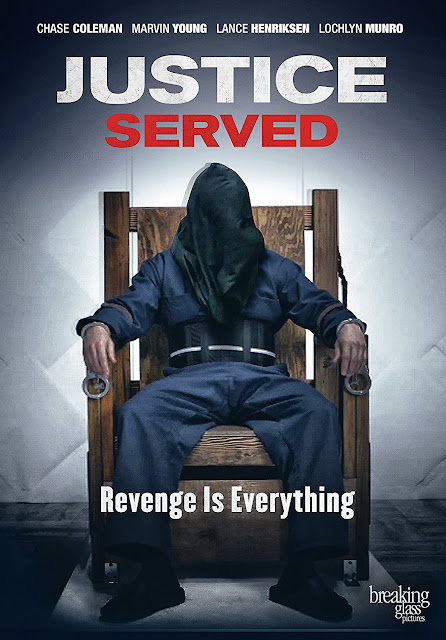 Indie film stalwart breaking glass pictures fully displays its love of edge regarding the May 9, 2017 DVD release of the 2015 neo-noir drama "Justice Served." The grit this time is that the survivors of violent crime victims get a second bite at the apple regarding seeing that the perp. does not walk. The multiple twists at the end more further justify watching this one.

The following YouTube clip of the "Served" trailer makes excellent use of the available 2 minutes to introduce many themes in the film in a manner that is true to its style.


"Served" commences with the brutal nabbing of small-time crook Galen Terry from the neighborhood dive where he drinks cheap booze and proves that he does not know when to keep his trap shut. The action then shifts to the strongly contrasting story of likable and attractive Luke Palmer. Palmer is seeing shrink Dr. Helen Florentine (whom "N.Y.PD. Blue" vet Gail O'Grady seems to channel "The Sopranos" Dr. Jennifer Melfi to play) in an effort to deal with the lack of justice regarding the murder of his wife the previous year. This relates to an error regarding the handling of the evidence in the case against the prime suspect resulting in that person avoiding a conviction for that crime.

The two stories collide when Jake is abducted soon after arriving in Arizona for a vacation; he is drugged and discovers soon after waking that he is locked in a room in which Terry is strapped to a chair. The rest of the story is that "Justice," who is a distorted voice coming from a speaker in the room, is forcing Palmer to review even the inadmissible evidence against Terry for the purpose of determining his guilt without the interference of the pesky guidelines of the court system.

One twist is that the aforementioned chair is connected to a button that Palmer controls. Justice encourages that young widower to push the button to shock Terry to prompt him to cooperate with the proceedings.

The audience soon learns that the unseen judge (and presumed jury and executioner) is ambitious in that he or she has two other cases going on in this private Hall of Justice. The second one features Frank Black himself Lance Henriksen as accused child molester/killer Henry Callas. This proceeding has Callas facing the mother of a young missing (and presumed dead) child.

The glee (and the frequency) with which the grieving mother pushes her button to torture Callas shows the contrast between how that "trial" is going and the Stockholm Syndrome that Palmer is experiencing. The sadistic zapping further evokes great thoughts of the pilot of "The Simpsons" in which members of that clan delight in shocking each other during an unorthodox family counseling session.

The other proceeding in this trio is an odd (and less dramatic one) that has a young widow facing the suspected killer of her husband. Said defendant having a personal relationship with the survivor and knowing things about her husband of which she is unaware is the main initial twist in this one.

The idea of kidnapping both survivors and persons who almost certainly "dun it" and locking them in a room for three days alone merits a comparison to the real-life "Stanford Experiment" in which college students volunteer to play the role of either prison guard or inmate. Adding the element of sanctioned electroshocks provides further evidence regarding art imitating real life.

Things going horribly awry on the second day of the unfortunate incarcerations enhance the vibe of  "Stanford," which also ends early due to unanticipated mayhem.

Writer/director Marvin Young takes a page from the masters in having the story continue well after the survivors of what can be considered The University of Phoenix Experiment go their separate ways. We learn that justice is a dish best served within a couple of meanings of that word and that most angst is relative.

The extras consist of  a behind-the-scenes feature, and interviews with Young and with his cast and his crew.

Anyone with questions or comments regarding "Served" is encouraged either to email me or to connect on Twitter via @tvdvdguy.