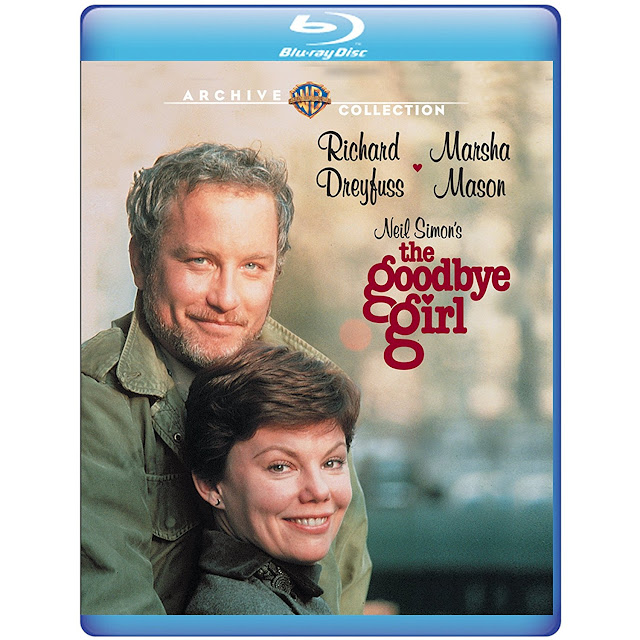 The Warner Archive Blu-ray release of the 1977 Neil Simon comedy 'the goodbye girl' aptly proves both that sometimes they come back and that you can go home again. Archive digging this one out of the vault 40 years after your not-so-humble reviewer having the thrill of being out on a school night (and experiencing agony of missing "Welcome Back Kotter" to do so) to watch the film in a theater shows that this one easily passes the test of time.

Richard Dreyfuss earning the distinction of being the youngest man to win the Best Actor Oscar for "goodbye" is the tip of the iceberg regarding the accolades for this film. The Golden Globes and BAFTA also grant him best actor status for that role. Further, the film is the Golden Globes choice for Best Picture and Best Screenplay. That organization additionally awards Marsha Mason the Best Actress honor.

The following YouTube clip of the theatrical trailer for "goodbye" provides a nice sense of the basis for the aforementioned fuss.


"goodbye," which New Yorkcentric playwright Neil Simon writes, is a notable example of the Manhattan-based films of the late-80s. A close cousin is the 1977 Woody Allen classic "Annie Hall." The ending of "goodbye" stirs thoughts of earlier New York classic "Breakfast at Tiffany's" by having an uber-emotional climax on a rainy New York street followed by a poignant theme playing over the closing credits.

On a more general level, "goodbye" has elements of the late '70s sitcom "Mork and Mindy." The starting point of this comparison is a hyperactive and easily agitated Dreyfuss outshining the less emotive Mason in her straight woman role in the same manner that frantic Robin Williams literally and figuratively runs circles around mousy Pam Dawber. The similarities extend to Mason's Paula McFadden leading a challenging but largely even-keeled live until odd hairy "alien" from Chicago Elliot Garfield literally shows up at her doorstep and almost immediately begins sharing her living space.

The circumstances that lead to the loath at first sight for "odd couple" Paula and Elliott are that divorced Paula is living alone with her daughter in the apartment recently (and abruptly) vacated by actor ex-boyfriend/leaseholder Tony. The "crimes" of Tony including subletting the apartment to Elliott without the knowledge of Paula lead to her having a nudist, guitar-playing, health nut, meditation freak living in the next bedroom. Anyone familiar with these '70s films or with the work of Simon know that Paula and Elliott will be jointly chanting mantras within an hour of reel time.

The charmingly sadistic Simon mines great humor from repeatedly humiliating our leads in the period between despise and desire. Elliott gets the worst of it in having his director (perfectly played by Paul "Mr. Bentley" Benedict of "The Jeffersons") insist that Elliott play Richard III much more as a queen than a king. That leads to a desperate Elliott essentially becoming a pimp. For her part, 30-something Paula must return to a physically grueling career as a dancer, work as eye candy at a car show, and become so broke that she must scoop up uncooked spaghetti from the street.

Simon the Sadistic does grant our couple happiness only to yank it away in a manner that reflects the worst insecurities of Paula based on her traumatic romantic past. This leads to one of he best lines in the film in which Elliott states that he hates the prior men in the life of Paula who prevent her from being happy with him.

This leads to the aforementioned rainy scene in which history is repeating itself in the form of Elliott heading out to literally seek fame and fortune, leaving Paula and her daughter behind with a sense that the man in their lives is falsely asserting that he is just going to the corner for a package of cigarettes.

Simon shows why he gets the big bucks in providing a variation of the Hollywood ending in the form of a drenched and distraught Audrey Hepburn seeking her soaked discarded cat. Resistance is futile regarding knowing that Simon is serving up schmaltz but falling for it anyway. That bastard then hits the audience with a closing theme that has even more impact than the "Tiffany" closing tune "Moon River."

The following YouTube clip of a groovy American Bandstand performance what can be considered "Paula's Theme" (ala "Arthur's Theme" from the same era) provides a sense of what Simon has in store for "Goodbye" rookies.


The apt far-from-final goodbye regarding this post is that "goodbye" is a witty romantic comedy that shows what people who know what they are doing behind and in front of the camera can accomplish.

Anyone with questions or comments regarding "Goodbye" is strongly encouraged to email me; you also can connect on Twitter via @tvdvdguy.