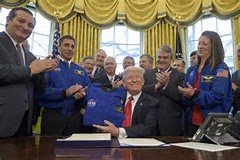 A spokesperson for Fox News announced yesterday that that network and First Daughter Ivanka Trump are teaming up to create a weekly series titled "Real Donald Trump." The spokesperson noted that this venture is the first reality show on Fox News in the 21-year history of the network.

The series is premiering this summer. Preliminary responses to this includes disdain regarding any all-news network adding a reality show to its schedule and speculation that this for-profit venture explains the Twitter activity of President Trump.

Ivanka and husband Jared Kushner attended the press conference at Fox News headquarters that announced this new show. Ms. Trump and Mr. Kushner blatantly refused to answer questions by The New York Times and other media outlets known for being critical of the president.

The spokesperson stated that each episode documents the events that prompt selected tweets that President Trump has posted under @realDonaldTrump since the hard-fought 2016 presidential campaign.

Your not-so-humble reviewer especially looks forward to the "Real" episode based on the following tweet by Trump immediately on this post initially appearing on the Unreal TV site.

Anyone who understands the intent of this attempt at humor and has civil questions or comments regarding it is welcome to email me. You really can also connect on Twitter via @tvdvdguy.