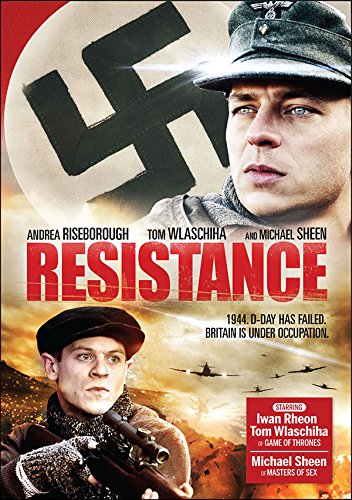 The Film Movement March 7, 2017 DVD of the 2011 British drama "Resistance" is a nice viewing companion to the hit series "The Man in the High Castle" that the streaming service of a Seattle-based retailer makes available. The "what if" in this film based on the 2007 novel by the same name by Owen Sheers is that the D-Day invasion fails, allowing German forces to occupy England.

The following YouTube clip of the "Resistance" trailer offers a terrifically accurate sense of the film. This includes peeks at the artistic cinematography and the perfect soundtrack.


"Resistance" opens with scenes of the menfolk of a small English farming community heading out for parts undeclared. Their women discover that absence on waking the next morning and speculate that theirs husbands and sons have joined the titular group that operates against the Nazis. We do see that at least one scared lad named George (played by Iwan Rhoen of "Game of Thrones") definitely has taken up that cause.

The third part of the equation is a German occupying force arriving on a quest for what is referred to merely as a map for much of the film; the absence of the men is of secondary importance.

The women coexist surprisingly well with their uninvited long-term guests, who are surprisingly congenial. Young wife Sarah (Andrea Riseborough of "Birdman") in particular strikes up a close relationship with German commanding officer Albrecht (Tom Wlaschia also  of "Game of Thrones.")

"Resistance" is worthy of inclusion of the Movement catalog of the best films from around the globe because it is an insightful character study of every main player in this story. The largest scope of this is the German soldiers being generally nice guys who are not real keen on Nazi principles and the village women not feeling a strong compulsion to actively repel these invaders. In fact, the level of cooperation becomes surprisingly high in the film.

For her part, Sarah greatly misses her absent husband Tom but enjoys the company of Albrecht. This creates great turmoil that extend beyond any elements of a romantic triangle. Sarah and her fellow women know that the British government prohibits collaboration and requires active resistance. However, the circumstances in the village do not call for such active hostility.

For his part, Albrecht develops any increasing sense of Stockholm Syndrome as he becomes closer to both Sarah and the other women. A larger aspect of this is becoming their protector against far less compassionate German troops.

George is an even more interesting character. We see his progression from the rawest of recruits to facing the toughest rite of passage. No character communicates the harsh realities of war as well as he does.

The most realistic/wonderful element of this is that this is not your grandfather's WWII war flick. This is not a tale of stalwart allied forces heroically prevailing over pure evil German foes while the American and/or British women bravely keep the home fires burning and/or suffer horrible fates at the hands of the Germans.

Anyone with questions or comments regarding "Resistance" is encouraged to email me; you also can connect on Twitter via @tvdvdguy,