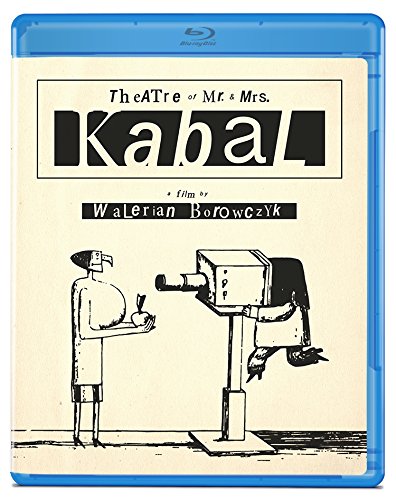 The April 25, 2017 Blu-ray releases from Chicago-based Olive Films shows that the scope of the catalog of that company knows no bounds. Prior releases include the (Unreal TV reviewed) '80s teencom "Zapped," the (also Unreal TV reviwed) Frank Sinatra historic drama "The Pride and the Passion," and epic star-studded comedy (yes Unreal TV reviewed) "Blast Off." The two textbook French art-house films "Theatre of Mr. & Mrs. Kabal" (1967) and "Blanche" (1971) by Waleerian Borowczyk clearly demonstrate that the fruit of the Olive tree is varied and always succulent.

The artistic pen-and-ink style that is reminiscent of American animator Bill Plympton and the copious symbolism in "Kabal" favor letting Olive handle the initial description of this one. The back cover synopsis states that the film is "a glimpse inside the weird and wonderful world of the theatrical Kabals. The henpecked Mr. Kabal, prone to ogling young females through his binoculars, is never quite beyond the reach of the statuesque and domineering Mrs. Kabal who flutters about (quite literally when butterflies appear inside of her stomach) in a connubial reign of terror."

The creation of Mrs. Kabal starts the film is a personally favorite segment that has her altering her initial appearance to her liking. She then is joined by an animated version of creator Borowczyk, who immediately incurs the hilarious wrath of his "daughter." This leads to the appearance of Mr. Kabal.

The appearances of the aforementioned young females is in the form of "Benny Hill" style live footage complete with a flesh-and-blood leering geezer. Subsequent disgusting footage is from a medical documentary that shows the contents of the meat suits that comprise the human race. This may be your best chance to see the inside of your lungs.

The aforementioned animated butterflies (and other inked creatures) play a prominent role. One segment in which Mr. Kabal takes flight shows that the insects can carry far more than their own weight.

An especially symbolic segment has Mr. Kabal finding himself in the body of his wife; we get additional insight into the psyche of the Mrs. Kabal when she creates a seemingly endless supply of clones. Vigorous (apt) French kissing by Mrs. Kabal further contributes to this psychological profile.

Borowczyk augments his museum-quality drawings with a wide range of appropriate music. The "Wedding March" is played several times, and a well-known Christmas carol contributes a perfect note (no pun intended) to another scene.

All of this concludes with a scene that brings things back to the beginning in a manner that intensifies the moderate "Monty Python" vibe throughout this production that predates "Python" by a few years.

Anyone with questions or comments regarding "Kabal" is strongly encouraged either to email me or to connect on Twitter via @tvdvdguy.
Posted by Matt Nelson at 8:11:00 PM