'Retake' DVD: Updated Post on Film About Paying the Price to Relive the Past 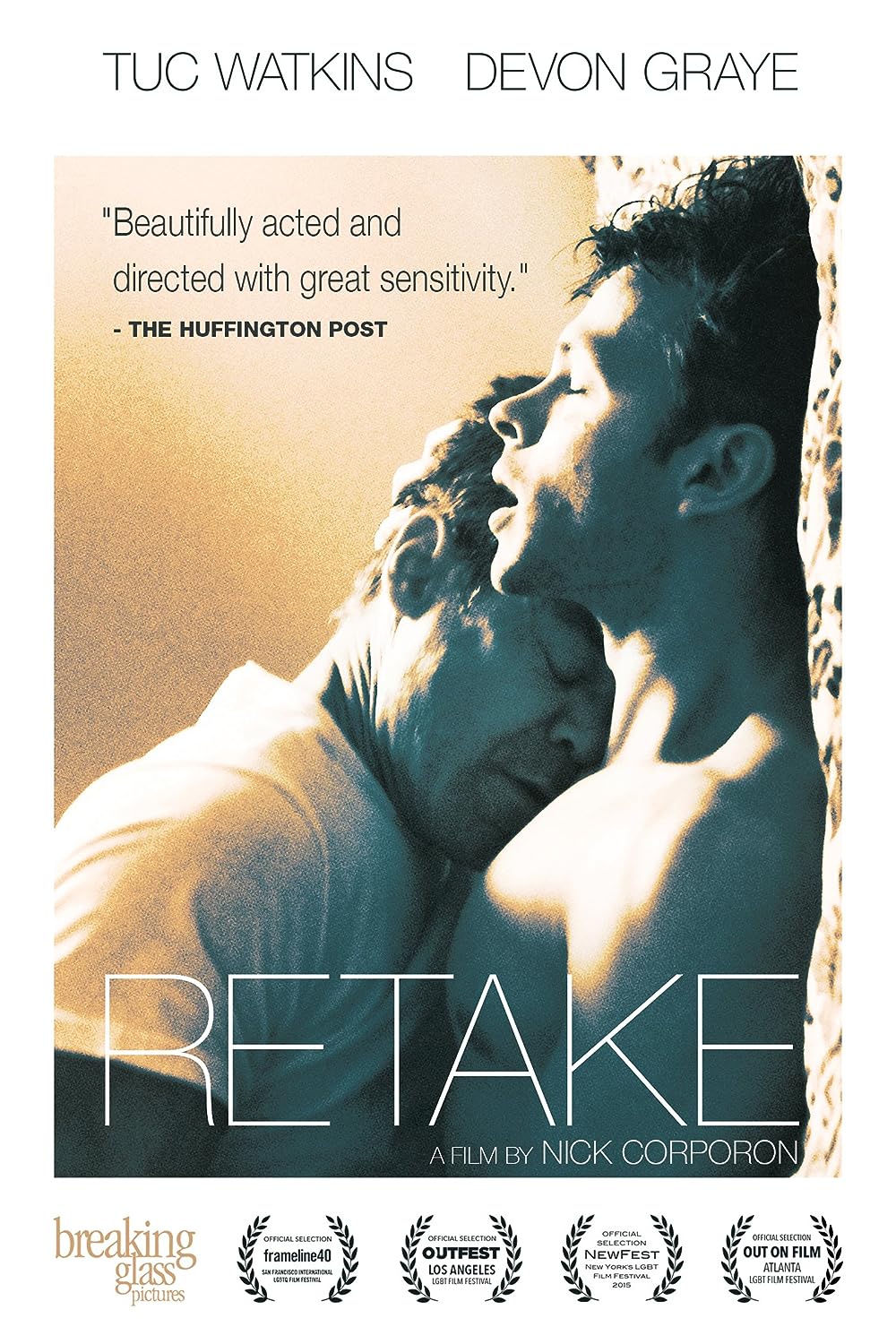 [EDITOR'S NOTES: This updated review is part of a series of posts on this film. The Nick and Tuc portion of this series consist of a published interview with star Tuc Watkins and an article on a chat with producer/director/writer Nick Corporon.

The original post on "Retake" primarily is for the theatrical release of the film. A recent watching of the DVD extras shows that these genuinely special features warrant the following updates to that review.]

Increasingly art-house gay-film oriented breaking glass pictures continues its run of releasing movies with central characters that are boys who like boys whose stories are relatable to everyone all along the Kinsey Scale with the topic du jour. The DVD release of this one hit actual and virtual store shelve on January 10, 2017. The beautiful Southwest scenery and the opportunity for a special date night make it a good choice for a cozy evening at home.

The universal theme this time is in the form of the titular do-over relating to a strong urge to put right what once went wrong. In that regard, "Retake" is similar to the recent (Unreal TV released) glass release "Lazy Eye" in which two men reunite 15 years after an abrupt and traumatic end to their love-at-first-sight relationship.

The following YouTube clip of the "Retake" trailer nicely highlights the retro look and stylistic approach of this film in which the past plays an integral role.


The current character study centers around middle-aged top-dog Jonathon, who comes to San Francisco as the first step in his process to resolve anxiety regarding an incident from roughly 20 years earlier. The literal partner-in-crime that he requires is a rent boy who can play the role of a past love.

An unnamed hustler passes the initial test and agrees to accompany Jonathon on a road trip to the Grand Canyon for the right price. The long dark hair and valley boy persona of this street boy that brings to mind an actor whose almost interchangeable early roles include a part in the awesome 1991 Gus Van Sant drama "My Own Private Idaho" earn this "Retake" character the name "Keanu" for purposes of this review.

"Desperate Housewives" star/soap actor Tuc Watkins does a good job as the distraught Jonathon whose quest for inner peace always gets thwarted. Textbook "the guy who was in that thing" character actor Devon Graye does equally well as the 20-something American gigolo who adopts whatever personality a customer requires in order to allow Keanu to avoid dealing with his own tortured past.

The clear (and of course ultimately violated) rules of the trip are that Keanu must never break character in the role play that Jonathon requires, must never ask Jonathon a personal question, and must always do everything that Jonathon tells him to do. The last rule leads to Keanu having the best lines in the film. He first asks if "everything" includes wearing a diaper and another specific humiliating act and then states his willingness to do so.

As is the case in every good film, "Retake" slowly reveals the full story regarding Jonathon wanting to go to exceptional extremes to recreate a road trip from his youth. Keanu becoming increasingly intrigued and embracing his role more fully is equally interesting.

The drama amps up as Keanu comes closer to the truth and to becoming more of his own true self as he bonds with Jonathon, who is still struggling with his past. This aspect of the film reflects the truth regarding any sexual role play that the individuals in the room really are not the characters whom they are portraying.

Although typically less dramatic than the circumstances in "Retake" (but often comparable to the events in "Eye,") most of us have the one who got away whom we never stop loving and would go to varying lengths to get back. Additionally, many of us are fortunate enough to find a forever someone with a spark of the person who gave us a special (but too short) period in our teens or 20s.

The update worthy special features include an interview with Watkins that is of particular personal interest regarding the parallels between this discussion and the aforementioned chat with Unreal TV. The new information includes Watkins characterizing "Retake" as a suspenseful love story and providing his witty perspective on a swimming pool skinny dipping scene that Corporon discusses in his interview with this site.

The involvement of Corporon in the extras includes hosting a "making-of" feature and doing a one-man Q & A at the Out on Film festival in Atlanta. The shaky hand-held camerawork on the latter evokes fond memories of the SyFy Channel remake of "Battlestar Galactica."

The more mature elements of the Q & A include Corporon discussing the good fortune in having Watkins and Graye mesh so well despite not meeting before the filming of "Retake" begins. Corporon also takes the fully grown "kids" in the audience to school in charmingly telling them that the two leads (who carry virtually all of the film) can communicate a great deal with their eyes and can adopt the persona of another person because that it was actors do.

A great "kids say the darndest things" moment has Corporon sharing the tale of co-star Kit Williamson hilariously ad libbing in a scene in which the character whom Williamson plans warns Keanu that Jonathan is a freak. A comparable moment involves an audience member who asks a very dark question visibly surprising Corporon.

The special features additionally include the Corporon written and directed short film "The Passenger." This one also has Graye playing a street-corner rent boy. One difference between this one and "Retake" is that the former has an even stronger live-stage vibe than the latter.

Anyone with questions or comments regarding "Retake" is encouraged to email me; you can also connect on Twitter via @tvdvdguy.