'blanche' BD: Shakespeare-style Medieval Fable with a Lot of Gaul 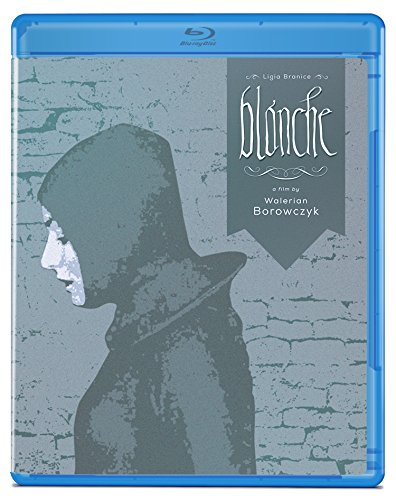 The "Goldilocks" aspects of these three "just right" releases are that "Theatre" is a series of artistic pen-and-ink animated shorts featuring the titular married couple, "blanche" is a realistic period (complete with apparent castrati) piece about love, lust, and revenge, and "Short" highlights both the animation and live-action talents of Borowczyk.

The accolades for "blanche," which the fascinating introduction on the Blu-ray tells us interprets a Polish legend, is the Interfilm Grand Prix award for Borowczyk at the 1972 Berlin International Film Festival.

"blanche" opens with a dance at the castle of 50-something "Master," who is married to the much-younger titular trophy wife. 20-something son/Crusades veteran Nicolas rounds out this pre-nuclear family. The realism extends beyond the seemingly accurate costumes and sets; the very high and clear voice of the singer in the trio that is providing the music indicates an unimaginable sacrifice to achieve that performance.

The way that Nicolas looks at Step Mom and his excessive chivalry toward her quickly establish that Master has cause for concern; Blanche soon learning that the King whose arrival is imminent is bringing his charming and lusty page Bartolomeo is the next sign of trouble. This rogue making a memorable entrance with an endearing grin on his face and a literal monkey on his back provide further promise of Shakespeare/"Canterbury Tales" style fun and intrigue.

Bartolomeo quickly does make moves on Blanche but does not get very far; the action heats up when the Learesque King to whom Bartolomeo is the wise and cunning Fool decides to wander the castle halls wearing the cloak of his boy. This leads to a confrontation that prompts Master to believe that Bartolomeo and Blanche are cuckolding him. For his part, Nicolas is none to pleased to learn of the perceived Bartolomeo/Blanche relationship. A partial spoiler is that the kids are the only ones who act sensibly regarding the whole matter.

The Middle Ages drama includes a couple of  armed confrontations between Nicolas and Bartolomeo, a highly dangerous liaison that leads to sealing the deal in an unanticipated manner, Master facing competing loyalties to his wife and his King, and monks who (like everyone else in this film) are not whom they seem. The plethora of actual and seeming deaths in the final third of "blanche" further enhances the sense of the influence of the Bard on Borowczyk.

Borowczyk further enhances this masterwork with the obviously artistic framing that the aforementioned Introduction explains. A related memorable POV scene in which Bartolomeo literally is dragged through the mud further demonstrates how Borowczyk is in for the art, rather than for the commerce. Olive investing so heavily in releasing his work reinforces a long-held belief that that company shares that sensibility.

As the back cover of the Olive release points out, the appeal of "blanche" "embraces very modern sensibilities." One only need substitute a divorce corporate vice-president, a decades-younger Princess Dianaesque school teacher who gets him to put a ring on it, a stepson who starting a promising Wall Street career, an aging CEO, and a hot-shot junior executive for our principal players. One can even leave the armed conflict and sadistic punishments intact regarding these masters of their universes.

In addition to the Introduction, Olive offers the special feature "Ballad of Imprisonment: Blanche." This is an interview program in which behind-the-scenes folks other than Borowczyk discuss the film.

Anyone with questions or comments regarding "blanche" is strongly encouraged to email me; you also can connect on Twitter via @tvdvdguy.