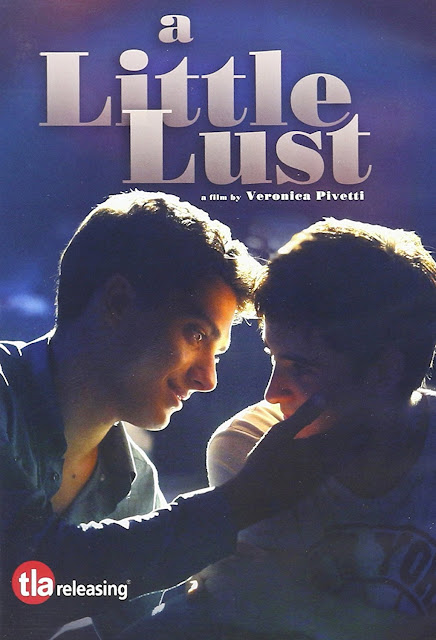 tla releasing chooses wisely in making the DVD of the 2015 Italian film "a Little Lust" available on April 25, 2017. The humor and the tone of this coming-of-age tale reflect the true spirit of  Gay Pride, which follows the release by a few weeks. April 25 also is when releasing is putting the similar-themed (soon to be reviewed) "Taekwondo" on actual and virtual store shelves.

The following YouTube video of the "Lust " trailer tells you everything that you need to know, including that most gay men have "a mother," about this film.


This aptly virgin directing effort by actress Veronica Pivetti begins with pure 16 year-old pals Rocco and Maria trying to consummate their friendship in the high school basement. As Maria points out, the problematic limpness relates to something other than the brain of Rocco. The good spirit with which Maria takes this flop (and several prior failures to launch) shows that she is the best friend that a closeted gay boy can have.

The next several scenes establish that "Lust" qualifies as a 21st century "Afterschool Special," not that there is anything wrong with that. Alpha dog Manetti aggressively demands a kiss from a girl one minute only to just as blatantly gay bash new boy in school Andrea seconds later and bask in his actions in class not long after.

Manetti also has a history of literally bashing Rocco, who is the victim of a brutal shower room assault early in the film. A subsequent incident involving Manetti and Andrea forces Rocco to confront his own feelings regarding his sexuality and to come out to his liberal-with-limits divorced parents. Mom Olga is a journalist, and dad Manuele is a famous psychiatrist who reinforces the theory that practitioners of that profession have at least as many issues as their patients. Olga's mother Amanda being a proud self-proclaimed fascist further complicates things.

Spoilers regarding this are that Olga wants Manuele to work his psychiatry magic to "cure" Rocco; Manuele shares that goal but realizes that no "fix" is a fast one, and both parents want to keep Amanda in the dark. Another spoiler is that Amanda has the best response of the three on learning that her grandson likes other boys.

Virtually every teen in any industrialized nation can relate to the strong feelings that Rocco experiences regarding the Manetti incidents preventing our hero from continuing to suppress his true self at the same time that American pop idol Jody McGee is in Italy on a farewell "Masturbation and Sodomy Tour" in the wake of that Bieber clone being outed. (Substitute a repressive boarding school environment and the final episode of a worshiped television series on a school night regarding your not-so-humble reviewer.) Few of us would go as far as Rocco in stealing from both Mom and Dad and hit the open road to attend our "must-see" event.

This "sometimes you have to say what the f**k" road trip provides Maria and Rocco a chance to work out his new normal while mousy pal Mouri plays third wheel. Additional entertainment/resolution comes with Olga and Amanda in lukewarm pursuit. For his part, Manuele is self-absorbed and slow to experience enlightenment.

Everything coming to a head as Harry, Hermione, and Ron make it to the concert and Olga and Amanda catching up to those meddling kids is predictable. The event that changes everything the next day is less expected and likely will strongly impact gay high school viewers who relate to Rocco.

The moderate tone of the film contributes to the effectiveness of this fable. Rocco does not feel compelled to wave a rainbow flag in the school cafeteria or to make a grand public declaration of love regarding the object of his affection. Nor do his parents even threaten to throw him out in the streets. All concerned merely try to resolve the conflict between Rocco being his true self and his parents not being o.k. with that development. The drama is MUCH more realistic than having Olga trying to set up Rocco with the cute towel boy at her gym or Manuele taking his son to a gay bar as a symbol of solidarity.

As Messrs Crosby, Stills, Nash, AND Young state, neither adults nor kids understand each other; the job of both is to realize that and to do your best to accept the other person in that relationship.

Anyone with questions or comments regarding "Lust" is encouraged to email me; you also can connect on Twitter via @tvdvdguy,