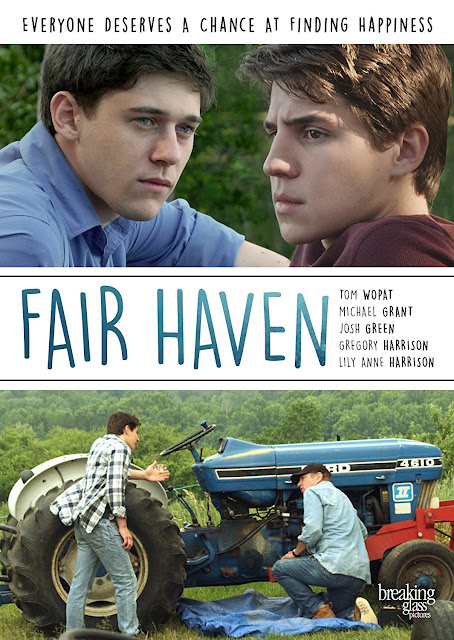 The tagline "everyone deserves a chance at finding happiness" for the 2016 gay-themed drama perfectly sums up the theme of this low-key tale of conversion therapy. The March 14, 2017 breaking glass pictures DVD release of the film is must-see for any family struggling with issues related to having a gay teen; it simply is a well-told story for the rest of us.

Seeing Tom "Luke Duke" Wopat as insensitive widowed dad Richard and Gregory "Gonzo" Harrison as religion-based conversion Dr. Gallagher add an '80stastic element to the movie. Dreamy 20-something Michael Grant keeps up with the veterans in his portrayal of James at 19.

The following YouTube clip of the "Fair Haven" trailer highlights the performances and shows how it delivers its message with a light touch.

Wopat and Grant have some of their best moments during the uber-awkward homecoming of James. The walk of shame from the bus to the family truck relates to being fresh out of a long-term stay at a conversion therapy facility. Richard is none too proud of his boy, and James looks as if he is returning from war.

Former piano prodigy James learns on the short ride to the family apple orchard in Vermont that Richard has spent the money set aside for tuition at the acclaimed Berklee School of Music in Boston on the operating expenses of  the orchard that his father started. Richard noting with only a slight edge in his voice that other expenses included the therapy further establishes the dynamics in the Grant family. Another aspect of this subtlety is that several scenes in addition to the homecoming show that the character named Richard can be a total dick.

The aforementioned low-key vibe of the film continues with James being a typical t-shirt and jeans wearing farm boy whose drab bedroom looks like the personal space of an all-American boy-next-door. He is much more Clark Kent than high-school drama club queen. One strongly suspects that our hero has never heard of Ethel Merman or Carol Channing.

Well-placed flashbacks of the therapy provide context for the present-day activity. For example, James soon encountering former boyfriend/fellow t-shirt and jeans guy Charlie triggers a scene in which Gallagher gently asks James if he has been intimate with another man.

The scenes with Gallagher further establish that his kind and gentle approach is to counsel his "patients." He understands the nature of their desires and provides a safe place for them to discuss them and for him to convince them why they are wrong. His idea of success is to substitute homosexual desires with heterosexual ones but does not seem consider with the corresponding damage to the psyche.

Other drama comes in the form of James seeing if the daughter of a preacher man can reach and teach him. Their awkward first date and not much better subsequent interaction shows that James is trying very hard to please his father and society but that his heart is not in it. One also feels sorry for the daughter regarding the ultimate possibility of an unhappy marriage to James, who does not show her much affection and spends most weekends with Charlie under a pretense.

A related issue with its own form of repression is a struggle that many kids from rural backgrounds face. Richard feels strongly that James stay at home and devote his entire life to the orchard, but James desperately wants to be a concert pianist regardless of whether he shares his bed with a man, a woman, or no one.

The symbolism regarding the element of how ya gonna keep 'em on the farm extends to a real-life Oliver and Lisa Douglas yuppie couple who want to buy the orchard to convert it to an organic operation. The response of stubborn and old-world Richard is that apples are already organic because they grow out of the ground; James sees the offer as a way out and recognizes that the times they are a changin'.

Less subtle symbolism exists regarding this tale of sin and temptation being set in an apple orchard.

The subtlety and realism continues to the climatic final scenes. An event that forces every player to come to terms with their new reality changes the lives of each of them. Just as in real life, no one gets everything that he or she wants but achieves adequate happiness to keep going.

This discussion illustrates that, like virtually every breaking DVD release, "Fair Haven" is notable for avoiding most gay film stereotypes. One can easily image a film about conversion therapy to be either high camp or a melodrama and for James and Charlie to be doe-eyed twinks who prance around the orchard in short denim cut-offs and Daisy Duke shirts that are barely buttoned and cinched at the waist. Instead, we get the much more substantive story of a man who has already lost his wife at a relatively young age and has a son who is a good kid but has desires that Dad can neither understand nor accept.

The bushel of breaking extras this time include an in-studio music video of Wopat, 35 minutes of cast interviews that begin with Wopat discussing his childhood on a Midwest farm, and both deleted scenes and a look behind-the scenes.