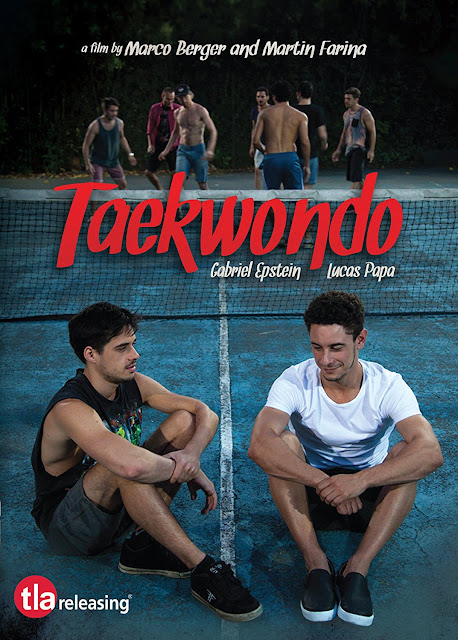 The tla releasing April 25, 2107 DVD debuts of the 2016 Argentinian dramedy "Taekwondo" and the lighter (Unreal TV reviewed) Italian film "a Little Lust" is further proof that gay-themed films are becoming more mainstream. The bullying and repression themes of "Lust" applies to even straight boys (and girls) and the unrequited love that plays a role in "Taekwondo" has equally universal elements.

One very general note regarding "Taekwondo" is that it semi-subtly reflects the highly enabled feral nature of the South American male. Not only is the central cast of characters encouraged to live out a female-free frat fantasy with the resulting bodily reactions, "Mom" simply sends the cleaning lady in to handle the disgusting mess while the boys play soccer to get out of the way. Having a South American roommate (with a personal maid back home) during a high school summer program is not an experience your not-so-humble reviewer wishes on his worst enemy.

The following YouTube clip of the "Taekwondo" trailer perfectly illustrates the related aggressive wolf pack mentality (complete with actual licking of the chops) of the 20-something male. One can only imagine the overpowering stench of sweat and Axe body spray in this scene.

"Lust" is a charming fable, and "Taekwondo" is a more adult tale that replaces cute everyteens with typical scruffy non-manscaped 20something guys. The concept of the latter is that Fernando is including his buddy German from their titular martial arts classes to join in the revelry at annual "boys-only" gathering at the literally spa-like country home of Fernando's family outside Buenos Aires. The related elements that make this is a releasing film are that "Ger" is gay but not out to "Fer" and is in love with his buddy/temporary roomie.

On a larger level, Ger is the odd man out for reasons that extend beyond being the only "virgin" at this gathering and being at least one of the few members of the group who are not typical 20-something straight guys. Fer explains that two members of the gang are friends from kindergarten days, most of the others are friends from early days of high school, and that the "new kid" is a recruit from no later than the 11th grade. On top of that, Ger joins this days-long party already in progress. These elements alone present numerous challenges to feeling comfortable.

The oblivious toned boys further unintentionally torment Ger by almost always being shirtless, regularly wearing only boxer briefs, often being naked, and thinking nothing of either stripping down completely or inadvertently (?) putting their naughty bits in the face of Ger or other members of the group. The equally copious casual use of insults such as "fag" and "cocksucker" directed at each other further tests the extraordinary limits of the patience of Ger. This especially is so regarding one guy regularly teasing a buddy who has had limited experience with women but has never been caught with his pants down with a man about being gay.

Additional fuel to the fire comes in the forms of the group often commenting about one of them staring at his bros and other casual comments providing Ger a reason to believe that he has a shot with Fer. Depending on your perspective, Fer does not help or hurt things.

Fer portrayor Lucas Papa does a good job keeping a straight face (pun intended) as he casually decides to sleep naked or keep his designer boxer briefs on but share a bed with Ger. Even Ger is unsure whether he is the object of the erection that occurs while Fer is sleeping next to him. Additional uncertainty exists regarding the underlying reason for Fer inviting Ger to the party. Removing any sexual element, there is a hint that Fer merely feels sorry for someone whom he considers no more than a casual friend.

Equal ambiguity aptly exists regarding the drawn-out "will they or won't they" (and the related "is he or isn't he") element of "Taekwondo." Evidence supports both theories that it is unduly tedious and that it slowly builds the tension to the reveal at the end of the film. Folks who favor the wishful thinking that the final shots (pun intended) will have Ger on his back while Fer has his tongue down his throat and another appendage lodged in another orifice should remember that it is equally likely that Ger continues to keep his amazing cool and simply hugs his buddy and thanks him for a great week. The third option is that Ger makes a rejected move on Fer, who either uses his mad fighting skills on his friend or simply says "thanks but no thanks"

Related tension exists regarding the extent to which Ger keeps his cool regarding the pervasive clueless insensitive frat mentality of his surroundings. The possibilities this time are that he stays quiet, punches the poor sucker who makes the wrong comment at the wrong time, or simply gives the group a figurative tongue lashing.

A personal experience that shows that this stuff happens begins with stopping to actually (i.e., not euphemistically) pet the bunny of three guys my age who just moved to my apartment complex. One of the guys speculating about how to tell if a guy is gay while sitting in their apartment 30 minutes later ended that visit for reasons that your not-so-humble reviewer is keeping ambiguous to be consistent with "Taekwondo."

Anyone with comments or questions regarding any of the thoughts expressed above is encouraged to email me. You also can connect on Twitter via @tvdvdguy.