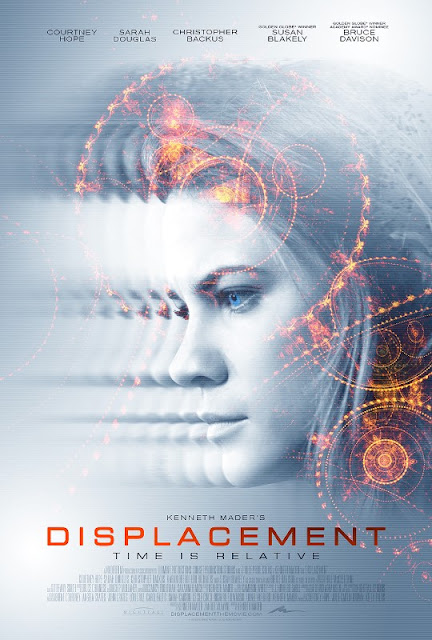 The April 28, 2017 premiere of the Arcadia Releasing Group time-travel thriller "Displacement" at the Laemmle's Monica Film Center provides a reason to return to the theater; the film looks so vivid in Blu-ray that it must look spectacular on the big screen. Folks who cannot make it to Los Angeles can see "Displacement" in Chicago or Dallas in May. The rest of you must watch in on VOD or wait for DVD and BD releases this summer.

The festival adoration for this clear labor of love by writer/director Kenneth Mader includes the Best SciFi Film awards at the 2016 Downtown Film Festival Los Angeles and the Hollywood Reel Independent Film Festival. These awards (and the other hardware on the mantel at Chez Mader) reflect Mader making the list of "Top 100 Indie Filmmakers in the World."

Aptly future cult film status will put "Displacement" in the ranks of the '80s time-travel cult classic "The Philadelphia Experiment," which earns a subtle nod in the film.

The following YouTube clip of the "Displacement" trailer provides a good primer on the film and achieves its goal of making you want to see more.

Opening scenes with intrepid "bold and beautiful" physics whiz Cassie Sinclair (Courtney Hope) waking in a bathtub full of ice with her kidneys intact but not the same being so regarding the intestines of her boyfriend only to soon shift in time sets a pace that Mader maintains throughout the film.

As is the case in good time-travel films that do not insult Asimov fans, understanding the science behind this fiction requires moderate concentration and keeping track of the altered events also necessitates focusing on the larger screen in front you, rather than the small one in your hand. Making a movie that you actually must watch (and enjoy doing so) is a very good thing in this era in which most big-budget films consist of action sequences stapled together with short periods of discourse.

The true genesis of the action is the mother of Cassie dying of cancer; this prompts our 21st century Nancy Drew to develop a means of time travel so that she can see Mom before she passes. The rub is that this effort creates numerous other problems that extend well beyond any butterfly effect of this effort.

The new challenges that Cassie literally creates for herself include preventing the aforementioned death of her boyfriend/possible research thief, dealing with personal/professional Daddy issues with her physicist father, evading others who either want to improperly profit from her work or altruistically prevent it from wreaking additional havoc, and avoiding a "Timecop" style meltdown from coming too close to alternate versions of herself. This demonstrates that taking quantum leaps to put right what once went wrong is more complex than it seems.

Sarah Douglas, who will always be known as Kryptonian villain Ursa from the Christopher Reeve "Superman" films, shines as "X Files" style Dr Miles. Miles shows great menace in her style of imprisoning and interrogating Cassie for either the aforementioned noble or nefarious purposes. Frustration related to dealing with multiple Cassies greatly enhances an already memorable performance.

One spoiler is that Cassie does not have sex with her grandfather, thus becoming her own grandmother.

The final analysis is that "Displacement' ain't a a Zack Snyder attempt at a darker and edgier "Back to the Future." Mader clearly knows (and loves) his stuff. His making us think and showing that Father Time can be as much of a bitch as Mother Nature proves that intelligent life still exists in Hollywood.

Anyone with questions or comments regarding "Displacement" is encouraged either to email me or to connect on Twitter via @tvdvdguy,