'F**k the Disabled' DVD: A Harlem-Dwelling Gay Man with Cerebral Palsy's Tales of the City 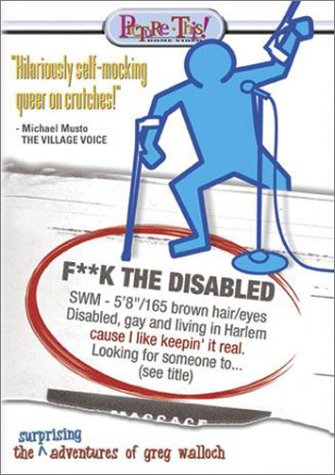 The following musings regarding the 2002 DVD release of "F**k the Disabled" (nee "Keeping It Real: The Adventures of Greg Walloch") by breaking glass pictures division Picture This! proves that the scope of breaking providing edgy gay-themed productions extends beyond the recent era of nationwide marriage equality and repealing the "don't ask, don't tell" policy of the military. In other words, Rich and Richard who own and operate breaking truly earn the label of "fierce."

The following YouTube video of the (not-such great video quality) trailer for "Disabled" provides a great sense of the wit and wisdom of Walloch.


"Disabled" is a documentary/concert/skit film about stand-up comedian Greg Walloch. The characteristics that primarily provide fodder for the humor of this millennial are that he is gay, has cerebral palsy, and is a (mostly) baby-faced white man living in Harlem.

The title of the film nicely reflects the 'tude of this California transplant and provides a good context for understanding the concept of the production. This story begins with Walloch explaining during a performance that a female friend insensitively asks him if he is gay because his cerebral palsy precludes women sleeping with him. This inspires Walloch to think up the titular concept of female volunteers sleeping with handicapped men to prevent those guys from turning gay. This includes one of the short films that comprise the skits that provide the third element of the movie.

Arguably the most amusing bit of the film is Walloch sharing his reaction to hearing straight men from his Harlem neighborhood discussing performing oral sex as a requirement for getting drugs. Stating that Walloch observes that this shows that he has been missing out is not much of a spoiler.

The documentary portion of "Disabled" largely consists of footage of Walloch doing just fine walking around New York. His narrative during his daily life includes discussing the extent to which he embellishes the truth in his act. A scene in which he finds humor from taking inordinately long to make it to a stage nicely showcases his attitude toward his condition.

The audience further meets the parents of Walloch. Both his discussion of his mother and her attitude toward her son makes many gay men wish that she was his mom. We further meet the brother of Greg, who shares an amusing aspect of the coming out of his sibling.

The lack of any sensationalism is the best part of this comprehensive look at the art of a performer with an unusual perspective. Other than walking with two canes, Walloch looks and acts like most of the rest of us. Further, the Harlem-related stories mostly are more low-key than expected.

The aforementioned attitudes of Walloch regarding the impacts of his sexual orientation, his upbringing, his cerebral palsy, and his voluntary choice of residentce contribute to the uniqueness that warrant the making of "Disabled." Devoting 90 minutes to witnessing it will enhance your attitude for a lifetime.

breaking provides a true special feature in the form of a amusing deleted scene from the act of Walloch in which he describes auditioning for a role on "Sesame Street." The spoiler this time is that Walloch notes that a casting couch limit that he imposes on himself may be a factor in the outcome of that meeting.

Anyone with questions or comments regarding "Disabled" is welcome to email me. You also can connect on Twitter via @tvdvdguy.