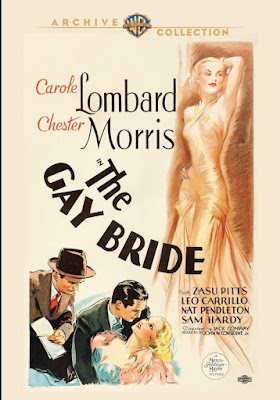 The Warner Archive April 4, 2018 DVD release of the 1934 Carole Lombard screwball comedy "The Gay Bride" proves both that funny is eternally funny and that everyone has his or her price. The fairy tale relates to choosing the pauper over the loaded crime prince.

Lombard stars as the titular "doll" who marries speak easy owning "guy" William T. "Shootz" Magis in the wake of the repeal of Prohibition. His other challenges include a rival gang and an underling separately acting to move him six feet under the ground.

Mary does not meet Shootz on walking into his bathtub gin joint or while working as a waitress in a cocktail bar; she is a chorus girl in a theater that a friend of Shootz owns. This leads to her using her fatale wiles to snare the wiseguy of her dreams.

An amusing aspect of this variation of a shotgun wedding is that Tommy guns play a role in Mary becoming a runaway bride effectively straight to the bank. This flight throws her into the car (but not the arms) of bodyguard/accountant/aspiring grease monkey Jimmie "Office Boy" Burnham (Chester Morris). Our not-so-blushing bride immediately blatantly showing her true colors clearly demonstrates that Office Boy he is not the only one willing to screw his boss for the right price.

The next bit of hilarity occurs during the wedding night. Mary goes to great lengths to ensure that she has adequate protection before consummating her marriage. A spoiler is that she later learns that the devil is in the details.

The next portion of the film amusingly has Mary taking Shootz for more than he is worth; this fleecing includes a heavy sucker tax. For his part, Office Boy knows the score but an't sayin' nothin'.

Drama follows trauma regarding Mary getting a chance to trade up; at the same time, she feels an increasing desire to give at the office.

This leads to general mayhem as Mary tries to use ill-gotten gains to do good without trading in her designer footwear for cement shoes. This effort to go straight requires Office Boy to choose teams and to avoid becoming a soprano.

Of course, all works out relatively well for our made men and our woman on the make.

Anyone with questions or comments regarding "Bride" is strongly encouraged either to email me or to connect on Twitter via @tvdvdguy.