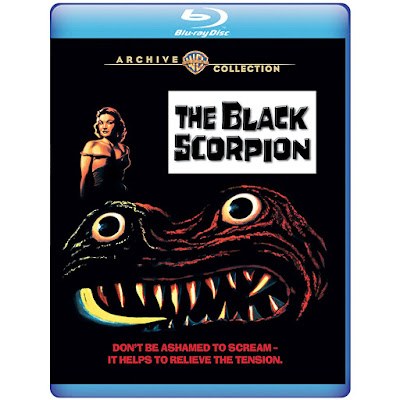 The Warner Archive March 20, 2018 Blu-ray release of the 1957 horror film "The Black Scorpion" offers great nostalgic fun for folks who (depending on their age) spent Saturday afternoons watching these creature movies either in the theater or on television. One difference is that the crystal-clear Blu-ray version looks far better than either of the earlier formats.

"Scorpion" hits all the genre highlights of an absurd premise, cheesy stop-motion animation and laughable models, and community theater grade acting. Of course, all that is what makes these films so fun. Further, they truly do not make 'em like that anymore.

A more cerebral perspective is that this Atomic Age production reflects the paranoia of the era regarding radiation. We do not know when the big one will hit or the catastrophic effects of such a detonation. A cool twist this time is that scorpions are worthy of fear even n their typical state.

The premise this time is that Mexico experiencing the greatest earthquake ever known initially has a realized consequence of seismic proportions and precedes mysterious cattle (and human) mutilations of an unknown cause. This is not to mention an eerie sound that may be crickets on steroids.

The aforementioned tremor brings local geologist Artur Ramos and his north-of-the-border colleague to rural Mexico to investigate. Their efforts leading to a very cool "Jurassic Park" style discovery is a highlight of "Scorpion." The boys also soon team up with a pretty ranch owner with whom at least one of them would like to get his rocks off.

The Short Round of "Scorpion" is an annoying cheerful and spunky Mexican boy named Juanito. His constant chatter and refusal to literally and figuratively wait in the car makes you wish that he becomes scorpion chow.

One epic scene has our scientists battle the scorpions at the bottom of the volcano so that they do not have to battle them here. This action has all of the aforementioned elements that make these movies such great guilty pleasures.

As also is typical, it seems that things are better until the mother of all scorpions travels to Mexico City for a reason other than buying inexpensive prescription drugs. Discovering whether it is beauty that kills the beast requires watching the film.

The BD special features consist of presentations on stop-motion animation. The most fun one is of dinosaurs from the 1956 Irwin Allen film "The Animal World."

Anyone with questions or comments regarding "Scorpion" is encouraged either to email me or to connect on Twitter via @tvdvdguy,