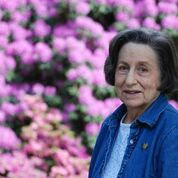 The most recent exhibit at the Norman Rockwell Museum in Stockbridge, Massachusetts goes back even further than the '60s and '70s animation of Saturday morning gods Joseph Hanna and William Barbera and the '50s through the '80s art of Pop Art deity Andy Warhol that has recently graced the walls of this shrine to Mr. Americana. "Gloria Stoll Karn: Pulp Romance" literally hangs the work of this dime-store magazine illustrator on the other sides of the walls of a exhibit of the 21st century art of Tony Diterlizzi of The Spiderwick Chronicles fame.

The common element of these exhibitions beyond all of them being worth a drive to the scenic Berkshires is that they are part of the Rockwell mission to promote the art of American illustrators. The ticking clock regarding the Karn exhibit is that it closes on June 10, 2018 to make way for the summer self-explanatory offering "Keepers of the Flame: Parrish, Wyeth, Rockwell, and the Narrative Tradition" (OH MY!).

An tour of  the Karn presentation that is the work of Deputy Director/Chief Curator Stephanie Plunkett by charming and knowledgeable Rockwell curator/exhibitionist Jesse Kowalski was the focus of a recent trip to this very Vermonty region of The Bay State. Two nights at the nearby Red Lion Inn (read all about it) made this journey especially terrific.

Kowalski stated that the exhibit is doing very well and noted that a group from central New York visited the museum just to see it. Personally tagging along with a group of grade schoolers was great fun, but there is no need to share who among us did not meet the ideal of sitting entirely quiet and fully focusing on the member of the Rockwell education staff conducting the tour.

The vibrant reds and yellows that are Karn trademarks MUST be seen in person to be fully appreciated. The same is true regarding the incredible attention to detail that makes this work even more lifelike than the paintings of the dude for whom the building is named.

The below images provide an incomplete sense of this talent. Professional and aspiring artists will note that the rare ability of Karn to draw hands allows her to avoid the cheap trick of hiding them in pockets and otherwise out of the picture. 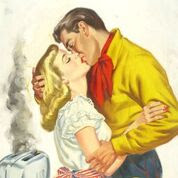 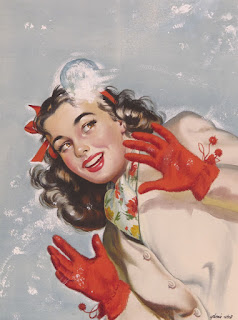 The follow up was a delightful hour-long telephone conversation with 94 year-old Karn, who is as sharp as she was back in the day.

The Bromx tale of Karn begins with her being born in that borough before her parents move to the Sunnyside neighborhood of Queens. While living in Archie Bunker territory, Karn became one of the first ever students at the Fiorello H. LaGuardia High School of Music & Art and Performing Arts of "Fame" fame. Her memories of those days include fellow students jamming on the otherwise empty subway when they left school at 3:00 p.m. each day.

Karn recalled seeing a photo of Jackie Kennedy and the kids by classmate Lawrence Schiller when Karn attended a concert at Carnegie Hall decades after they graduated. This proved the truth of the classic punchline that the way to get to Carnegie Hall is to practice.

One Day At A Time

The amazing story of Karn breaking into a man's world when she was in her '20s during the '40s began with literal housekeeping. Her mother agreeing with Oprah that clutter should not be allowed to accumulate prompted recent high school graduate/current insurance company file clerk Karn to attempt to burn the portfolio of her artwork. The portfolio not fitting in the chute that led to the incinerator prompted Karn to leave it on a pile of newspapers that were due to be directly placed in that inferno.

Karn recalled the pulp magazine publisher stating "I've seen worse" when first shown her work. This led to regular assignments during the rest of the career of the pulp cover art career of Karn.

The first amusing aspect of her work that Karn discussed was that she and the other artists never were provided the stories for which they created the art. They merely received general guidance and would submit roughly three pieces for consideration. The related funny story is that Karn often would resubmit the rejected art until it was selected for another cover.

The divulged secrets of the trade were that each illustration would take roughly 3 days. Karn further described the work as "almost like a formula" that included "a pretty girl and a handsome guy." The shortcuts included changing hair color.

Rangeland Romance seemed to be the magazine for which Karn (who has a particular talent for drawing dreamy cowboys) seemed to most enjoy working. She recalled that the guidelines for covers for that publication included that it had to have something to do with horses.

Karn shared as well that she used the superintendent as a model. She described him as "very thin, wiry, tall and strong." She additionally stated that she once drew him holding a chair over her head. Kowalski stated that Karn would draw from live models in contrast to Rockwell photographing his models and using those images when painting.

Kowalski added that Karen based her work on either herself or her friends. He further explained that she used bright colors to help her covers stand out among the large numbers of magazines that newsstands and other outlets displayed.

One sad aspect of this important bit of Americana was Karn saying "we never signed out art work and never got credit."

Karn continued painting covers until she and her husband (more below) moved to her current home of Pittsburgh in 1949 when he got a job with a mining company; she noted that sending her art to New York in a manner that it arrived unharmed was more than a minor inconvenience.

The immense appeal of Karn includes her lively sense of the "good old days." This related to liking that everyone was polite and dressed neatly and men wore fedoras in this era before the world went pop and the safety dance became popular. This awesomely related to her fairy tale marriage with her prince.

Karn told the story of her mother often telling her about the handsome well-dressed man in their building. This gallant gent always smiled and held the door open for Mrs. Stoll.

This led to DeSoto once again being a guardian angel for Karn. She and her mother were at a party in the apartment of that artist when her mother pointed out that the fedora-wearing dreamboat who had just entered was the man about whom she had been speaking. This led to actual love at first sight.

The adoration by Karn included her husband being "very handsome" and modest regarding his good looks.

The manner in which the Rockwell exhibit of Karn came to be further proves the value of being good and kind. Kowalski shared that a neighbor of Karn called to inquire about showing the pulp fiction art at the museum. Subsequently looking at that work, speaking with Karn, and then visiting with her prompted Plunkett to green light the exhibit.

Kowalski added that "the field of illustration in the early 20th century was dominated by men, especially in the pulp fiction magazine field, so it made sense to show the work of someone who stands out in the field."

Karn stated that she and Rockwell never directly spoke. She did attend a lecture that he gave at a Society of Illustrators event in New York. She noted that "he was wearing a well-worn tweed coat that was very typical of Norman Rockwell." She added that she did not know if he was wearing a hat because she did not see him arrive or leave.

Kowalski noted that one difference between the artists was that Karn got most of her art back and kept the bulk of it with the exception of her work for horror magazines, which was not her preferred genre. Conversely, Rockwell allowed The Saturday Evening Post to keep the covers that he drew for that publication.

The Deal of the Art

The work of both Rockwell and Karn reflect an important era in an American history in a manner to which literally everyone can relate. This is the last time that we were not violently divided along age, gender, class, race, or ideological lines.

The Rockwell deserves tremendous credit and support for providing an opportunity to properly experience this art by seeing it in person. The way cool gift shop is a bonus.

Anyone with questions or comments regarding this article is encouraged either to email me or to connect on Twitter via @tvdvdguy.