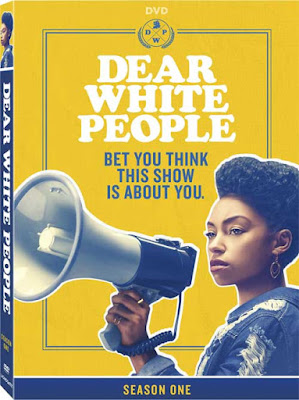 The Lionsgate May 8, 2018 DVD release of S1 of the Netflix series "Dear White People" provides a chance for a mostly seamless marathon (rather than binge) viewing of this "one-more" worthy thought-provoking series.

Your not-so-humble white middle-aged reviewer knowing virtually nothing about the 2014 film of the same name on which "White" (which brings back several cast members and has a 100-percent Rotten Tomatoes rating) is based supports a primary thesis of the series. It is equally predictable that prior personal knowledge of the black college student experience is limited to the "Cosby Show" spin-off "A Different World." That '80s sitcom chronicles eldest Huxtable child Denise going to the predominantly black Hillman College until Cosby fires star Lisa Bonet for being a nasty girl.

"White" not surprisingly far outpacing "Different" in terms of honesty and candor makes it a great show for those of us who gave little thought to the "world" of our black classmates, for past and future college students, and for kids of all races who start university life in September.

The following YouTube clip of the official trailer for "White" highlighting most of the same themes as this review nicely validates that the following thoughts include the major themes of the show.


One of the most awesome aspects of "White" is the action in this show following the tone of the "Scandal" clone "Defamation" that the black students gather to watch with the same devotion as white college students viewing primetime soap "Dynasty" in the '80s. The first "Defamation" scene alone warrants buying the "White" DVD.

"White" is set on the campus of predominantly white Ivy League institution of higher education Winchester University where film major Samantha White hosts the titular show on the campus radio station. The basic theme is that she uses the titular phrase in much the same way that Jeff Foxworthy utilizes the expression "you might be a redneck if ..."

In this case, White speaks in a purposefully condescending tone to enlighten Caucasians about her race and then elaborates on the subject. An awesomely realistic comeuppance occurs when she incorrectly assumes that a caller who does not sound black and who disagrees with her is white.

An equally good moment comes when Samantha witnesses a white friend of her white boyfriend Gabe get upset when the local coffee house changes the beans that it uses. Even most folks with a narrow view of what constitutes a "white person problem" can agree that this product change is far from tragic.

The Samantha/Gabe relationship particularly parallels the major "Scandal" element of black fixer Olivia Pope having an affair with the married white POTUS. The backgrounds of both couples provide numerous obstacles to their achieving the desired happiness.

Roughly the first five of the ten S1 episodes revolve around campus satire magazine Pastiche planning a blackface Halloween party in response to the radio show of White. The "White" creative team awesomely expands this story WELL beyond the fallout from holding a racist event. They deserve special credit for a hilarious scene involving another mistaken assumption that proves that what is almost fatally embarrassing when it happens to you is fall-on-the-floor funny for the rest of us.

The subplots include Pastiche cancelling the party only to have an initially unknown person hack their Facebook account to cancel that cancellation. We also get several different perspectives regarding the party and the aforementioned consequences.

An incident at a party several weeks after the Halloween party has even broader relevance to the campus and the real world. Semi-radical black student Reggie is having a great time with his white buddy until this friend sings along with a rap song that he correctly points out has nigger (we all know what the n word, c word, b word, and f word mean and may as well say them when the heat of the moment prompts those utterances) right in it.

Reggie calmly tells his friend that using that word is uncool; neither the friend nor Reggie backing down escalate things to the point of a physical altercation. This leads to the campus po po showing up.

Even most white people agree that the campus cop who singles out Reggie regarding providing proof that he is a student is racist. Many people of all races further can understand Reggie not acting in any threatening manner but still refusing to show his student ID. The level of agreement is highest of all regarding the outrage as to the cop pulling a gun on Reggie.

The similar (but much less violent) incident at the Philadelphia Starbucks roughly a month ago one year after "White" S1 aired helps prove the point of this episode. Another aspect of this is this episode airing after the Winchester students react to one of the real-life incidents of white cops shooting a young black man.

A personal bone of contention regarding this storyline is the arguably undue sensitivity regarding the hard-to-define line regarding black and white friends. On a similar note, other minor unintended sleights in "White" and real life that should be no-harm-no-foul can escalate. This is not to say that these events do not warrant a civilized enlightening discussion.

A personal incident is why this hits a personal note. My best ever job was in a highly racially diverse environment in which no one gave much thought to the backgrounds of the other persons. One black man constantly joked about his race to the extent of an extended bit on the frequent occasions that he brought fried chicken for lunch.

This guy would take cabs to and from work while I and everyone else rode either the bus or the subway. I once asked out of curiosity why he took cabs. He responded that he did not like the bus and provided the reasons for that view.

I thought about the nature of our friendship and his consistently joking about being black before clearly joking "and riding in the back is no fun." He got very upset. I felt horrible that I hurt his feelings and repeatedly and strongly apologized. He seemed to let it go but to not really forgive me.

I am sorry that I hurt the feelings of a friend but still do not understand that reaction. I NEVER would have made the same joke to a casual black friend or even a black friend who never joked about his race.

The rest of "White" S1 follows the tone of the aforementioned plots; we get discussions regarding blacklash (not a typo.) censoring white people from expressing their opinions, presumptions of race and class affecting awarding scholarships, and even mild-mannered black men not being comfortable getting their haircut in either white or black barbershops. This is not to mention HILARIOUS plots surrounding the adventures of BMOC Troy, who feels strong pressure to act white and is oblivious to the desires of his gay roommate.

The special features include "Dear White People: Art as Activism" in which cast and crew members discuss the characters.

Anyone with questions or comments regarding "White" is strongly encouraged either to email me or to connect on Twitter via @tvdvdguy.