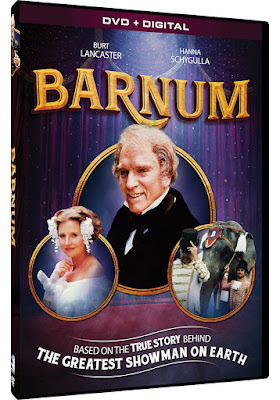 The Mill Creek Entertainment May 1, 2018 DVD + Digital release of the 1986 Burt Lancaster TV-movie "Barnum" allows biopic and/or circus fans to see a significantly different take on the titular entertainment pioneer than the portrait in the Christmas 2017 Fox film "The Greatest Showman on Earth." "Barnum" actually making the asserted subject the focus of the film is one advantage over the recent movie.

The principle that applies to all propaganda provides the best guidance regarding determining whether "Barnum" or "Showman" more accurately portrays their common subject. This tenet is that there is your side, the side of the other guy, and the truth. In other words, both films likely are comparably true. The larger truth is that the primary factor is that both provide good entertainment.

"Barnum" opens with thrilling scenes at the literal three-ring circus for which we have Barnum to thank. Skilled storyteller Lancaster then figuratively takes the center stage as the elderly version of the titular showman. This sets the stage for the early 19th century childhood of  Barnum that sets the stage for his career. We see the grandfather of Barnum teach his grandson the importance of imagination and the value of hyping your product.

The story then progresses to the fairly well known story of a teenage Barnum essentially trading the family cow for magic beans. Keeping his job as a store clerk requires turning those "beans" into a cash cow.

Lancaster continues the narration as we see Barnum progressively prosper through ventures that equally entertain and rely on the gullibility of the American public. We also learn the story regarding the famous phrase "there's a sucker born every minute."

This narrative greatly diverges from the "Showman" story. A particularly large difference relates to the interaction between Barnum and singer Jenny Lind. The Lancaster version is much tamer and focuses more on the business (rather than the pleasure) aspects of their relationship.

The greatest fun comes regarding the founding of the circus and the circumstances regarding how Bailey joins the act. One story that "Barnum" omits is how this enterprise comes to join forces with the Ringling Brothers. The short version is that a scheduling conflict leads to the merger.

As shown above. the aforementioned focus on the actual subject of the film reminds folks familiar with the life of Barnum of notable moments in his life, introduces everyone else to this unique story, and reminds everyone of the basis for all modern entertainment. We all like shiny and/or  odd things and enjoy being dazzled and fooled time after time after time.

Anyone with questions or comments regarding "Barnum" is strongly encouraged either to email me or to connect on Twitter via @tvdvdguy.