'I Am the Blues' DVD: Documentary Exploring Origins of Roots Music 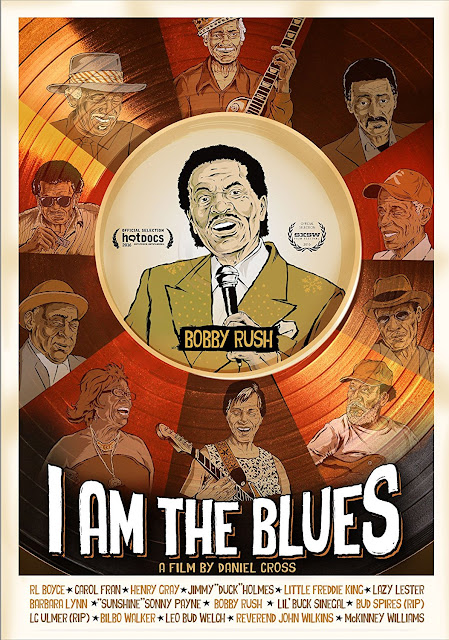 Indie foreign and domestic movie deity Film Movement awesomely inadvertently takes a page from the Unreal TV playbook regarding the Movement DVD release of the 2015 documentary "I Am the Blues." Just as Unreal TV strives to help keep "TV Land" shows alive in the public consciousness, "Blues" documents the music and the stories of the members (who are in their 80s) of the genuine blue men groups before they pass away.

One of the many, many, many, musicians who participate in this labor of love by writer/director Daniel Cross hits the nail on the head in commenting that the hardships of the young guys of today do not compare to the experiences of the old-timers whose experiences come through in the titular form of music. A prime example of this is a lyric that begins on the happy note of a doctor slapping a newborn to get the infant to breathe and transitions to the baby dying soon after.

The above sentiment comes through loud and clear in the following YouTube clip of a festival trailer for "Blues."


The star of this film is Bobby Rush, who provides a tour of the juke joints and other venues for the blues. This region in the South is nicknamed the Chitlin' Circuit in recognition of the food-based payment that many musicians received. One man discussing his payment beginning with a hamburger each for him and his band, increasing to a surplus of burgers, and ultimately reaching $2/night shows both the variation of this payment-in-kind and two ways of increasing the compensation.

Greater historical context comes in the form of the widespread open segregation of the South during the first-half of the 20th century. One story that involves a venue requiring the band to play behind a curtain is a concrete example of the well-known attitude of many white people of the day that they want to hear the blues but do not want to see the musicians who play them.

Aspects of the related poverty of most black people during this era include tales of working in the cotton field and also of one musician making his first instruments largely out of discarded junk. This reinforces the theme of the blues that with great deprivation comes great soulful expression.

We also hear from a couple of blueswomen, who include Barbara Lynn. Her best story is of her fellow musicians beginning to call her mother by the same term of endearment that Lynn calls the woman who brought her into the world. The ladies also regale us with a song that is based on what is known to be a one-night stand before the night ends.

As stated above, the story of these true American idols and their music is an important (and oft-overlooked) part of American heritage. Rock and other popular forms of music would be far different without the blues. Cross helps keep that alive through his film in the same manner that Unreal TV does what it can to remind folks that television has much more to offer than reality shows.

The DVD bonus feature is 30 minutes of additional footage.

Anyone with questions or comments regarding "Blues" is strongly encouraged to email me; you also can connect on Twitter via @tvdvdguy.