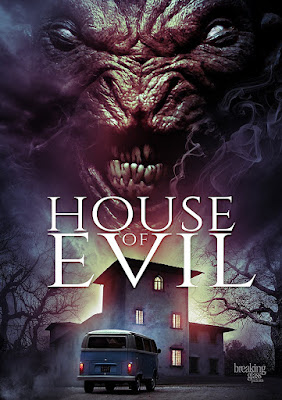 The Breaking Glass Pictures May 8, 2018 DVD release of the 2017 indie horror film "House of Evil" provides a good chance to see one of the most nostalgically retro movies to come along in a while.

This fact-based tale of a young couple moving into into a bargain-priced house with a history being straight out of '70s sensation "The Amityville Horror" is only the tip of the iceberg. "House" also channels a 1968 horror classic, and the retro look of the film extends to a VW van of the type that knockin' is unwelcome when it is rockin'. For the fun of it, we will call the couple Sonny and Cher.

"Evil" also borrows from the more modern horror classic "The Sixth Sense" in having eerie figures dart around in a creepy dark house. This is not to mention the things that literally go bump in the night.

All of these films owe Alfred Hitchcock an ENORMOUS debt. This genius is credited with realizing that horror is more terrifying if the setting is from our daily lives, rather than the creepy mansion on the outskirts of town.

Sonny is a photographer and Cher is a painter; their reasons for buying a large country house include a desire to start a family. The roach infestation that they discover on moving in is the least creepy indication that something is amiss.

Much of the terror is psychological in that the spirit of the house and of the former occupants seems to occupy our couple. This is particularly true regarding Sonny, whose time in his basement darkroom seems to increase in direct proportion to his mood becoming dark.

Both the hold of the house and the nature of a master plan become very apparent near the end of the film. The positive way of looking at this is that the general idea of having a role in an important undertaking can be flattering.

Anyone with questions or comments regarding "Evil" is strongly encouraged either to email me or to connect on Twitter via @tvdvdguy.