'The 10th Kingdom' BD & DVD: Mini-Series Reverse Version of 'Once Upon a Time' 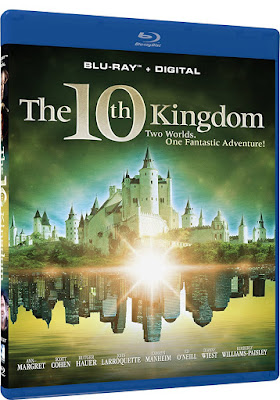 The Mill Creek Entertainment separate June 5, 2018 Blu-ray and DVD releases of the star-studded 2000 mini-series "The 10th Kingdom" provide fans of the recently concluded long-running ABC dramedy "Once Upon a Time" another bite of the poisoned apple regarding a fun melange of our world and that of fairy tales. It further has the same spirit as the 2007 Disney comedy "Enchanted" in which fairy tale folks experience Manhattan melodrama.

These releases provide everyone quality family entertainment that truly appeals to folks from 8 to 80. The bigger picture is that we have another reason to shout for joy regarding Mill Creek expanding well beyond its roots as a purveyor of compilations of public domain television series of the '50s and the '60s.

This epic and very colorful production filmed in a plethora of European countries additionally looks and sounds spectacular in Blu-ray.

The following YouTube clip of the Mill Creek trailer for "Kingdom" perfectly captures the beauty and the tone of the series.


The premise is that the titular realms are fairy tale monarchies that are tied to a specific fairy tale notable or creature. For example, the Fourth Kingdom where most of the action occurs is the Snow White realm and trolls rule the Fifth Kingdom. Red Riding Hood and Cinderella also have their own lands. Our reality is the 10th Kingdom, which is only accessible via a magic portal.

The other broad bit of lore is that the turmoil in the nine kingdoms 200 years ago is the stuff of which our fairy tales are made.

The action begins with Relish the Troll King (Ed O'Neill) breaking into the Snow White Memorial Prison to once again spring his three stooge-like offspring; this escape comes to extend to releasing Evil Queen (Dianne Wiest) from her own unfortunate incarceration.

Another lucky break for the queen allows her to implement the first steps of a plan to prevent arrogant grandson Prince Wendell from ascending to the throne of his kingdom. Comic mayhem begins to ensue when the prince (who is a victim of a "Freaky Friday" style transformation) flees into our world.

A destined encounter between the prince and New York 20-something waitress Virginia Lewis brings her and her deeply cynical building superintendent father Tony Lewis (John Larroquette) into the action. Former guest of the queen Wolf pursuing the prince into Central Park is the final element that allows the story to fully develop.

The Lewises, Wolf, and the prince then essentially travel through the looking glass on crusades with overlapping objectives. Wendell claiming his crown and the Lewises acquiring the necessary means to return home involves battling virtually every fairy tale baddie known to man.

The queen puts the trolls and a huntsman (Rutger Hauer) on the tail of our group. They also square off against other foes whom they meet in their travels.

The ticking clock is the impending coronation which will result in the ersatz prince getting the corner office unless Wendell can timely revert to his true self. Meanwhile, every effort of the Lewises to find a way home ends in amusing disaster. These stories strongly merge in the fifth of the six episodes when Virginia and Tony learn that their connection to the kingdoms is much closer than they ever imagined.

The copious fun of all this begins with the concept that one man's fairy tale is another dwarf's reality; this goes on to non-stop action as our main group essentially follows a long and winding yellow brick road effectively to the castle of the wizard. The third big element is having a perfect tone that reflects modern cynicism and conflict while keeping things adequately light for the kids.

The bonuses include a grand 45-minute "making-of" feature that looks as spectacular as the series. We also get the insights of cast and crew regarding this successful ambitious production.

Anyone with questions or comments regarding "Kingdom" is strongly encouraged to email me; you also can connect on Twitter via @tvdvdguy.