'In Between' DVD: The Secret Lives of Palestinian Women in Tel Aviv 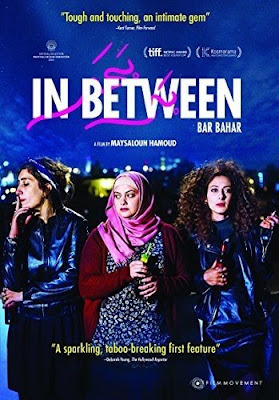 The Film Movement May 1, 2018 DVD release of the 2016 Israeli drama "In Between" (which is the current Movement Film of the Month Club selection) shows that girls globally just want to have fun. The three lead characters all having man trouble adds another universal element. The usual Movement substance enters via the trio of 20-something women around which "Between" is centered are Palestinians sharing a Tel Aviv apartment.

As the liner notes for the DVD state, the women "find themselves 'in between' the free and unfettered lives they are aspiring to lead and the restrictions still imposed on them by society."

The well-deserved 14 festival awards (and they waz robbed nominations) for "Between" include a virtual sweep of the 2017 Awards of the Israeli Film Academy.

An early scene in "Between" has worldly criminal defense attorney/regular pot smoker/fag hag Leila and restaurant worker with a big secret Salma boldly performing morning routines that include smoking and keeping their heads uncovered. The unexpected arrival of new roommate  "country mouse"/student Noor amuses the girls and sets the stage for the primary action.

The new girl is there because the apartment provides a quiet place to live near the university where she studies computer science. Her "between" consists of resistance to loosen up increasingly frustrating her new roomies while fiance/chicken mogul Wissam does everything that he can to get her to move to Jaffa even though doing so would involve a two-hour commute to school every day. Wissam increasingly acting on his frustration regarding the "corruption" of his fiancee horribly shows how badly Noor has it.

The "between" of Leila relates to having a strong relationship with boyfriend Ziad, but her modern ways precluding her from literally being a girl whom he can bring home to mother. One bone of contention is exactly how much Ziad expects Leila to change.

Salma is caught even more "between." Her protesting a workplace ban against speaking Arabic creates a large problem. On top of this, she enters a realtionship with someone her parents consider entirely unacceptable at the same time that they are pushing their little girl toward a marriage with whom they consider "Mr. Right." Like her two roommates, Salma finds herself intensely struggling to meet expectations that are the polar opposite to the person whom she has become.

A large percentage of us can relate to the values of our parents and of outdated mores being contrary to the person we want to be. "Between" shows us that the situation is even worse for Palestinian women who reasonably want to emulate their real and reel role models. It must be very tough to see women in powerful positions while finding yourself literally at the mercy of the men in your life. Baby, you have a long way to go.

Movement gets very creative regarding the always compatible short film that it includes with the May Club selection. "Scent of the Morning" is a real-time 8-minute film in which a man whom bombings awaken in 1982 Beirut tries to make coffee under conditions that the barrage hinders. His inner monologue puts this experience (including his reasons for not leaving the city) in good perspective.

Anyone with questions or comments regarding "Between" is strongly encouraged either to email me or to connect on Twitter via @tvdvdguy.