'Drama 4 in 1 Collection-John Travolta' Blu-ray: Diverse Films Are The Ones That You Want 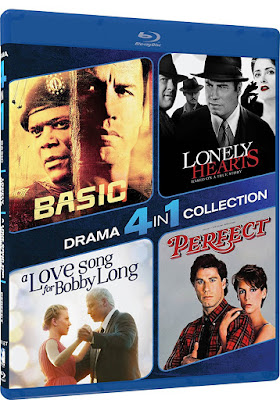 Mill Creek Entertainment further shows its increasing cult-oriented diversity with the 2-disc May 1, 2018 Blu-ray release of "Drama 4 in 1 Collection-John Travolta." These films mostly from the early 2000s resurrection of the career of the star of "Saturday Night Fever," Grease," and "Pulp Fiction" include marathon-worthy quirky films.

"A Love Song For Bobby Long" (2004) is a good starting point because it arguably is the least-known of the four films and inarguably is the most entertainingly bizarre. Jersey boy Travolta stars in this character study of the titular stereotypical grey-haired Southern Gothic alcoholic washed-up womanizing former acclaimed literature professor. His current disgrace includes living in a squalor in a crumbling New Orleans house with former worshiping student/current cranky nursemaid Lawson Pines. Former castmate of fresh-off-the-boat royal Meghan Markle Garbriel Macht plays Pines.

Much of the action revolves around young free-spirit/future trainwreck Pursy Will (Scarlett Johansson) moving in with the boys on inheriting a share of their home. Her not-so-surprising history with Long that is revealed near the end of the film makes his behavior on her joining the group really creepy.

Seeing Travolta play both his true age and a Southern is unintentionally amusing. The bigger picture is that this imitation of a Tennessee Williams plays offers a fun change of pace regarding both the Creek collection and most films in general.

The period piece noir film "Lonely Hearts" (2006) is the second most odd movie in the collection. Travolta plays truer to form in his role as washed-up New York homicide detective Elmer Robinson. Seeing famous wiseguy portrayor James Gandolfini cross over to the other side of law enforcement to play past and future Robinson partner Charles Hilberbrandt is even more terrifically unusual.

This moderatelyboiled tale has Hilberbrandt recruiting Robinson back into the game from his voluntary exile to a desk job in the wake of significant trauma. The impetus for this rebirth is the apparent suicide of a single woman who lacks any clear motive for ending her life.

The evidence soon points the boys in plainclothes in the direction of awesomely tortured psychotic Ray Fernandez (Jared Leto), who is one of the "Lonely Hearts Killers." His partner in breaking hearts and skulls is equally twisted "sister" Martha Beck (Selma Hayek), who stands by her man and eliminates any competition for his affection with extreme prejudice. Watching them prey on the lonely provides awesome perverse fun.

The recommended third film in this Travoltafest is the better-known "Basic" (2003). The washed-up alcoholic whom Travolta plays this time is former Army ranger/current disgraced DEA agent Thomas Hardy. He is living in squalor in Panama awaiting the outcome of a DEA bribery investigation when Army buddy Styles (Tim Daly) calls him in to help with a ticking clock investigation of the mayhem and bloodshed related to an incident during a jungle training exercise in the middle of a hurricane.

The drama includes the death of a hated sergeant, the conflicting stories of soldiers who do not adhere to the "Band of Brothers" mentality (or to no man left behind), illegal activity, and a gay soldier whom Hardy aptly notes does not receive the benefit of the "don't ask don't tell" policy of the day.

"Basic" does not have a dull moment and includes mostly sublime reveals with great surprises at the end.

"Perfect" (1985) aptly is the ideal choice for the last film in this marathon. Initially, it wonderfully represents the Travolta films of the '80s that include "Urban Cowboy" and "Two of a Kind." It additionally allows Millennials a good chance to see what they missed by not living through the "Me" decade. A fun aspect of this is having a soft rock star being so vain as to play herself in a cameo.

Travolta plays hard-news "Rolling Stones" reporter Adam, whose current priority is a story on a criminal trial of a reclusive computer company owner. Part of the deal for traveling from New York to Los Angeles for that story is simultaneously writing a softer story on how health clubs are the single bars of the '80s. One spoiler is that the men are even blonder, buffer, tanner, and have better hair than the women. The one surprise is that all of these Adonises have no interest in each other beyond gangbanging "the most used piece of equipment in the club."

Jamie Lee Curtis fills in for Olivia Newton John as former champion swimmer/current aerobics instructor/love interest Jessie. Her conflict with Adam relates to trust regarding his story not making her and her co-workers look bad. Of course, there are wacky misunderstandings that lead to traumatic confrontations that awesomely relate to true lies and anything but love.

The common thread that makes these films great is the camp factor related not only to Travolta perfectly playing a meathead but both character and actor seemingly being unaware of that aspect of reel and real life.

Anyone with questions or comments regarding "Collection" is encouraged to email me; you also can connect on Twitter via @tvdvdguy.