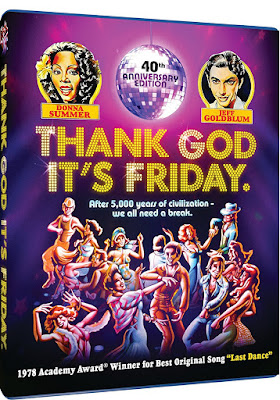 Groovy Mill Creek Entertainment celebrates prom season with the May 1, 2018 Blu-ray release of the 1978 musical-comedy "Thank God It's Friday." This funky tale of the adventures of diverse characters during one night at The Zoo disco in California is a classic example of the 1976 film "Car Wash" style "day in the life" vignette comedies of the '70s. "Friday" starring celluloid heroes who range from some that you recognize to some that you hardly ever heard of is equally typical of this sub-genre of film. Jeff Goldblum appearing with Debra Winger and Valerie Landsburg reflects this casting.

Goldblum plays Zookeeper/owner Tony DeMarco who repeatedly gets the comeuppance that audiences love regarding outrageously arrogant egotists such as this playa. He begins his evening carefully parking and covering his prize Porsche. He then enters his domain in which he stocks his personal petting zoo with the disco bunnies who frequent the club.

The patrons that night include suburban types Sue (character actress Andrea Howard) and Dave (veteran character actor Mark Lonow), who are celebrating their fifth wedding anniversary. Dave wants to end his evening with a cozy night at home, but Sue has a strong desire to experience the night life and to boogie. A hilarious scene in which an innocent bystander feels the brunt of their debate is a highlight of "Friday."

Of course, Sue wins out. Their initial hours being jostled and otherwise intruded on devolve to Sue catching the eye of a persistent DeMarco and Dave taking a trip with a Valley Girl of the Dolls. The underlying "Love Boat" style plot regarding this pair is the extent to which Sue will act on the her five-year itch and if Dave will be moving to a depressing divorced guy apartment building.

Landsburg, who is best known for her roles on the television series versions of "Fame" and "Hotel," plays one of a pair of high-school girls who sneak into the club. Landsburg's Frannie mostly is there to compete in the $200 dance contest for which The Commodores are providing live music.

Much of the comedy of the film revolves around The Commodores initially not showing up and then making the scene while their instruments are somewhere en route. This endangers the career of a radio DJ whose big break is consisting of broadcasting live from the club with the concert being the grande finale to the evening if it goes off and to the career of the DJ if it does not. The misadventures of the roadie trying to reach the club contributes further comic mayhem.

The final notable subplot has Disco Queen Donna Summer play aspiring singer Nicole, who sneaks her way to the boys in the band (and the booth) as her first step toward becoming an American Idol. The real life success of  Summer
regarding "Friday" is that she wins an Oscar for performing "Last Dance."

Folks familiar with the entertaining formula know the aforementioned loverboys (and girls) who are working for the weekend and going off the deep end in pursuit of new romance and other pleasures have a night to remember that involves each other and their fellow sufferers (including two nerdy college boys out to get some) to various degrees. Even those are no happier when the lights come on at closing time when they can't stay there at least are a little wiser.

The bigger picture is that "Friday" is timeless both in clearly representing a unique era in American history and presenting issues that pre and post-date the film for centuries.

Anyone with questions or comments regarding "Friday" is strongly encouraged either to email me or to connect on Twitter via @tvdvdguy.