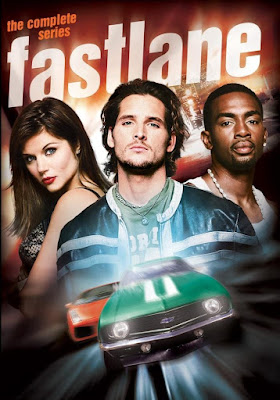 The unparalleled scope of the Warner Archive catalog is to blame for this site frequently referring to the diversity of Archive releases. The May 1, 2018 complete-series DVD set of the 2002-03 action-adventure series "faastlane" from the same source as releases from the genesis of the Golden Age is the latest example of this range.

This update of the 1968-73 television series "The Mod Squad" is the creation of McG of the "Charlie's Angels" movies and John McNamara, whose numerous credits include the Syfy series "Magicians." The central concept is that tough tomboy LAPD cop Wilhelmina "Billie" Chambers (former Kelly girl Tiffani Thiessen) runs the "candy shop," which is a base of operations that uses confiscated property such as fast cars and obscene amounts of cash as part of an undercover operation to take down high-level drug dealers and other criminals who live large. Billie being a former addict of a substance much stronger than caffeine pills should get "Saved By the Bell" fans so excited that they just can't hide it.

TV dramas veteran Peter Facinelli stars as Donovan "Van" Ray. His past includes a childhood that puts him a step ahead of most fellow cops. His scruffy good looks and habit of showing off his chiseled torso by going shirtless while wearing long pants makes him look like a West Hollywood street-corner rent boy.

Deaqon "Deaq" Hayes (Bill Bellamy) rounds out the group. He is a recent transplant both from New York and less recently to the enforcement side of police activity.

The pilot follows a fairly standard course in that it involves Billie recruiting Van after his partner/BFF is killed in an undercover operation gone bad. Deaq being the estranged brother of that partner contributes additional drama.

Many of the ensuing cases involve a personal element. A cool aspect of this is that an episode with a heavy element of the aforementioned wonder years of Van provides perspective regarding him often bonding with the female assassin, jewel thief, etc. whom he is assigned to collect evidence on before giving her a pair of bracelets.

One of the best episodes has the case requiring Van and Deaq to pair up with an ATF agent who may have been spending too much time deep undercover. The fun of this one is watching the repeated sadistic torture of our heroes allegedly for their own good. One of many examples is outing them as cops in a roomful of Russian mobsters.

A "very special" episode has the team join forces with an undercover agent regarding whom Billie feels very protective. Hilarity ensues when one of the boys would have been caught with his pants down if the interruptus had occurred a few minutes later.

Good drama ensues when the special guest star finds herself in serious danger and the team frantically rushes to save her. This alone shows the human side of our group.

An especially fun episode has Van and Deaq teaming up with "connected" series regular Aquarius (Big Boy) to open a night club to nail a drug dealer and to locate his well-hidden manufacturing facility. Highlights include the boys bickering about the name of their club and using amusing trickery to create the desired image.

The fun continues with episodes that put the "fastlane" spin on plots that include a "Midnight Run" escorting a fugitive who has hitmen after her, a tight deadline to avert a gang war, and the team being coerced into using their skills and resources for evil.

The copious DVD special features include unaired and deleted scenes from the pilot, a documentary on the evolution of "fastlane," and separate features on the stars and the stunts. Archive wraps up these extras with a fun set of bloopers and outtakes.

Anyone with questions or comments regarding "fastlane" is encouraged either to email me or to connect on Twitter via @tvdvdguy.