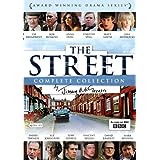 Although this installment in a series of posts on the BFS Entertainment DVD release of the 2006-2009 three series (my people call them seasons) British drama "The Street" comes shamefully long after a review of the first series and a discussion of the second series, the exceptional quality of the final episodes makes this wait worthwhile.


The terrifically simple "Street" concept is that it uses an anthology format to tell the stories of the families in a working-class Manchester England neighborhood. The trials and tribulations around which these stories revolve often involve both characters and storylines from previous episodes.

Hoskins plays the titular pub owner in the simply titled S3 episode "Paddy." The especially compelling central dilemma in this one is how this small businessman can manage keeping both his dignity and body intact in the wake of a local small-time gangster directly threatening to severely pummel him if Paddy does not reverse a valid decision to ban the son of the gangster from the pub.

Much of the discussion-worthy drama in this episode extends beyond the issues related to the street cred of both Paddy and the gangster to the former asking his loyal customers/friends to choose between taking on the gangster on his behalf and incurring both the wrath of said criminal and losing his patronage.

The cross-episode elements in this one include Spall's Eddie being among those willing to side with Paddy. The misfortune-prone Eddie is the center of several prior episodes, which include one in which presenting a false front costs him a great deal on a few levels and ends with a horrible humiliation.

The second S3 episode is equally compelling; this one has uber-dedicated single mother Dee, who has a huge secret, fending off the genuine affections of a loving and attractive man.

A similar S3 episode has highly bigoted chef Kieran, who can give Gordon Ramsay a run for his money regarding verbal nastiness, struggling to keep numerous secrets from his new Polish girlfriend. The subterfuge includes his intense hatred of Polish people and the fact that he does not commit a heroic act for which he accepts credit.

The series (and series) finale terrifically ends with an exceptional Eddie episode that touches on prior episodes that center around Eddie and brings back Hoskins as Paddy in a subplot that relates back to the S3 premiere episode.

The final analysis of this third stage of "urban development" is that it is very clear that series creator (and frequent episode writer) Jimmy McGovern goes out on top. Having this street effectively named after him is the greatest honor that he can receive.

Anyone with questions or comments regarding "Street" is strongly encouraged to email me; you can also connect on Twitter via @tvdvdguy.