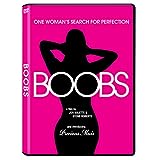 The aptly titled film "Boobs,"which documentary film distributor Garden Thieves Pictures is releasing on DVD EXCLUSIVELY THROUGH AMAZON and VOD on October 14 2014, is a tough one to analysis.

The following clip, courtesy of YouTube, of the spoiler-laden trailer for "Boobs" both introduces the audience to the subject of the film and shows that it could have easily been a Showtime network reality show.


On one level, "Boobs" subject Precious Muir is likable. Further, her story of  moving from London to New York to pursue a modeling career is interesting. Additionally, Muir's Kevin Federline style boyfriend contributes to the entertainment value of the film. One expects him to actually start drooling when discussing Muir's plans.

On a more superficial level, Muir's self-centered quest for breast implants (regarding which one can speculate that the film's producers directly or indirectly financed) is hardly comparable to a struggle to beat cancer or even to undergo plastic surgery to correct a genuine physical deformity.

It additionally is tough to feel sorry for the 20-something Muir regarding her having enviable success as a model for teen clothing but wanting to break into modeling adult clothes and posing for "Playboy." Her planned saline solution (of course, pun intended) makes sense but would hardly inspire any form of ice bucket challenge (but might have prompted a wet t-shirt contest.)

Additionally, the manner in which the surgery does not net the desired results is not very tragic. One feels sorry for the angst and distress that it causes Muir, but she hardly is in any condition that should even prevent her going out and about.

At the same time, the desire of Muir to undergo the surgery and her distress following that procedure provides a wonderful example of both the narcissism of our society and the enormous value placed on what is considered a physical ideal even it is artificially achieved at high monetary, emotional, and physical costs.

The only thing that remains to be shared regarding "Boobs" is that it is a great film for fans of reality show style productions and/or films in which the female star is topless throughout roughly 50 percent of the film.

Anyone with questions or comments regarding "Boobs" is welcome to email me; you can also connect on Twitter via @tvdvdguy.