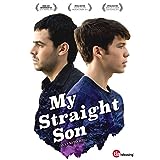 Canteen Outlaws, which is a division of LGBT home-video giant tla releasing, artfully expands the scope of its entertaining foreign films in which boy with girl finds that resistance is futile regarding new-found attraction to another boy to release the more mature and nicely presented 2012 Venezuelan drama "My Straight Son."

The following (largely spoiler-free) clip, courtesy of YouTube, of the trailer for "Son" pulls off the challenging trick of conveying a good sense of the characters and story without ruining most of the surprises in the film. This sense includes the well-known truism that we all have a family.

The interesting twist that "Son" offers on the standard story of the parents of a gay man rejecting their son on learning of his sexual orientation is that the hater is the titular 15-year-old offspring of well-adjusted 30-something Diego, who is in a solid long-term relationship with a man.

Aside from showing sexuality-based prejudice from a rarely depicted perspective, "Son" nicely straddles (no pun intended) several genre lines. The drama rarely strays into "melo" territory, the comedy is largely understated and does not involve much camp, and the mix of styles is well-executed.

Photographer Diego and his doctor boyfriend Fabrizio have a good (but imperfect) relationship that many gay, straight, and in-between couples should envy. They clearly love each other and are wonderfully playful together, but still have issues that largely relate to societal hang-ups.


An early scene in which the boys meet for dinner has all of the melange described above. They enjoy very playful G-rated role playing at the beginning, initially find the attention of a fellow diner amusing, and climax (pun intended this time) with a public act that removes any doubt regarding the nature of their relationship. All of this is very refreshing and delightful considering the varying levels of repression often associated with a gay couple enjoying an evening out in the primarily straight world.

The developments that soon ensue drive much of the action and strike the same nice balance between drama, comedy, and camp.

The first incident involves Diego learning of the imminent arrival of aforementioned son Armando, with whom Diego has never had much contact and has not seen for several years, for an extended visit. The complications include Armando not wanting to live with Diego and not knowing that his father is gay.

The sad truth is that there is a long history of teen boys mistreating their peers and men sometimes based on no more than the victim having an "girly" manner. It is equally sad that such cruelty often relates either to wanting to fit in or trying to avoid what can be a difficult truth to accept about oneself. These feelings also put a new slant on the line "the boys you used to hate, you date" from the classic "The Facts of Life" theme song.

The next event is a sudden encounter that leaves Fabrizio in a coma. (Boyfriend in a coma. I know; I know; its serious.)

Many viewers can relate to the obstacles that Diego faces regarding trying to visit Fabrizio in the hospital. Being barred from the sick bed of a highly significant other is one of the worst things that anyone can face.

This trauma also leads to Diego coming out to Armando and indirectly seeking compassion that the boy who already feels that he is has never been a high priority for his father is unable to provide. This ties into general unwarranted insecurity from which Armando suffers.

To the credit of the filmmakers, the tension and conflict between Diego and Armando is largely understated; on a similar note, a predictable meeting between a towel-clad Armando and a transsexual friend of Diego begins with a nice bit of humor but mostly consists of refreshing honesty and an equally notable lack of leering by Ms. del Rio.

"Son" further only veers into cliche country regarding plot developments that include Armando involuntarily getting a taste of walking in his father's Pradas, having Diego participate in a road trip with Diego and his circle of friends, and regarding how justice ultimately is achieved after a highly significant crime. The manner in which these stories develops mostly exceeds expectations.

All of this adds up to "Son" being a terrific 2010s fable that shows that gay men can be fun-loving and overall charming and witty without being flaming queens, that two men can form a loving and fulfilling relationship, and that the arguments for prejudices often crumble on becoming aware of reality.

Anyone with questions or comments regarding "Son" is welcome to email me; you can also connect on Twitter via @tvdvdguy.