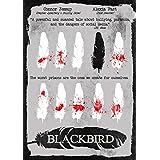 Philadelphia-based indie film distributor Breaking Glass Pictures once again extends its scope beyond quality LGBT-themed DVD releases in making the good 2012 Canadian drama "Blackbird" available on DVD and VOD starting October 21, 2014. The low-key tone and performances in this film about an odd and troubled (but harmless) teen boy getting horribly hung up in the justice system is very appropriate for the modern versions of this type of film.

The following clip, courtesy of YouTube, of the trailer for "Blackbird" overstates the drama in the film but nicely offers a sense of the themes. As our hero states in an included scene, he is "stupid, not dangerous."

The "wacky misunderstanding" that starts outcast Canadian high schooler Sean Randall, played by Connor Jessup of the TNT scifi drama "Falling Skies," on an After School Special style Kafkaesque nightmare is that he writes and posts a violent story online after the hockey jocks ramp up their animosity toward him several notches. The facts that Sean's father keeps loaded guns in their home and that Sean innocently uploads a video of said parental figure gutting a deer does not help matters.

Typical post Columbine and 911 paranoia leads to a dramatic arrest of Sean and ensuing not-so-fair judicial proceedings that lead to our quiet and quirky hero being incarcerated in a juvenile detention facility that houses young offenders together with little regard for the nature of their offense. Having someone who is locked up for joy riding sharing a cafeteria table with a lad who is serving time for murder illustrates the indiscriminate manner in which the portrayed judicial system treats a boy who finds himself facing hard time.

One spoiler is that the jailhouse brutality that Sean experiences at the hands of the more hardened guests of the queen does not involve becoming the girlfriend of one of them. However, these toughs clearly show their new victim who wears the pants in their community.

"Blackbird" also touches on other interesting aspects regarding the court of public opinion passing judgment merely based on an accusation of wrongdoing. Sean's father accurately comments on this in telling former goth Sean that the younger Randall learns the consequences of not blending in.

As mentioned above, the film conveys the above in a perfectly fine manner. A large part of this relates to Jessup doing his best work in scenes that require that being quiet and/or naive.

A more important aspect of the film is that it shows the harm from rashly acting out of fear in this era in which what often turns out to be a random scribbling on the wall in a boys' room in a high school can prompt a school-wide evacuation. Taking this drastic step in a good faith effort to avoid a potential horrific tragedy without apparently conducting any form of investigation seems akin to treating the presence of a peanut butter sandwich on school grounds as seriously as discovering a cache of heroin.

As an aside, one general stated principle of the United States legal system is that a sufficiently threatening overt act is required before the po-po can slap on the bracelets and drag someone downtown in the middle of the night. "Blackbird" and numerous real-life examples show that the legal system has largely abandoned that tenet.

Bringing a weapon to school or writing a plan to create mayhem is one thing; a one-time non-violent expression of intense frustration should generate a far different response.

On a coincidentally topical note, it seems that the threat of Ebola further spreading in the United States may lead to every poor sap who coughs in the grocery store being locked up in an isolation ward for a week.

For the record, your (often humble) reviewer does not harbor any ill will regarding any high school student or teacher and is in good health.


Anyone who has questions or (civil) comments regarding "Blackbird" is welcome to email me; you can also connect on Twitter via @tvdvdguy.