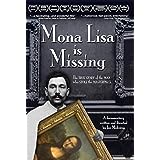 [EDITOR'S NOTE: This review is the first of two postings regarding "Mona Lisa." Unreal TV will run an article on a terrific discussion with "Mona Lisa" director Joe Medeiros during the weekend of October 25, 2014.]

The documentary "Mona Lisa is Missing," which  Virgil Films & Entertainment is releasing on DVD on VOD on October 21 2014, wonderfully evokes thoughts of very entertaining and informative documentaries along the lines of "The Wild Parrots of Telegraph Hill" and "Super Size Me" in an era in which many members of this genre seem like reality shows that paint with far too broad of a brush (of course pun intended) and merely present endless parades of talking heads. The fact that former Leno era "Tonight Show" head writer  Joe Medeiros pulls off the tricky trifecta of successfully writing, directing, and hosting the film makes it that much more special.

Aside from far surpassing many recent "documentaries" in artistic quality, "Mona Lisa" is notable for presenting its information in a very unbiased manner. Medeiros never hesitates to divulge the good, the bad, or the ugly regarding a topic that the audience can see is very close to his heart even without knowing that the event has interested Medeiros for years.

The following clip, courtesy of YouTube, of the trailer for "Mona Lisa" nicely conveys the themes and style of the film. It also shows why the documentary deserves at least a large percentage of the acclaim that the painting receives.


The underlying event in "Mona Lisa" is a genuinely daring (if not unduly sophisticated) theft of the titular masterpiece. Although "whodunit"  and "howdunit" are known, Medeiros turns his focus on "whydunit."

Medeiros uses a terrific blend of archival footage and images, animation, and talking heads to entertainingly depict the unpleasant life of Italian laborer Vincenzo Peruggia in Paris and the events while there that seemingly play a role regarding the aforementioned theft. The study of this era also discusses the fate of the titular painting in the interval in which it goes wandering.

Medeiros appropriately and expertly extends his investigation into the motive behind the theft. Peruggia's (now elderly) daughter and many other people have believed that a combination of national pride and arguably justified ill will regarding Parisians are behind the heist. The aforementioned Celestina Peruggia and her children Silvio and Graziella are very active (and charming) participants in this film. Other contributors include high-level Louvre officials.

The search of 1,000s of pages of a HUGE variety of documents that Medeiros and his intrepid team of researchers unearth provided evidence that less lofty reasons exist for the heist, which "Mona Lisa" depicts in a manner that strikes a perfect balance between being comprehensive and prompting glances at the time.

The family elements of "Mona Lisa" greatly add to the fun. This aspect extends beyond the aforementioned terrific involvement of the Peruggia familia to the Medeiros family getting into the act in amusingly unexpected ways.

The plethora of  DVD release bonus features include a dozen shorts, such as a film on a "Swiss Mona Lisa," deleted scenes, and an alternate ending to the documentary.

All of this amounts to a film that easily could be titled "Everything that You Ever Wanted to Know About the Theft of the Mona Lisa but Were Afraid to Ask." The answers to any remaining questions might be found on the website for the film.

Anyone with questions or comments regarding "Mona Lisa" is strongly encouraged either to email me or connect on Twitter via @tvdvdguy.