'The Last Supper' BD and DVD: The Art of War 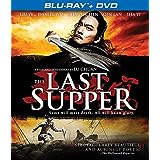 An especially notable element of the exceptional 2014 Chinese historical drama "The Last Supper " is that it is a beautifully filmed true epic in an era in which such movies (which were once a mainstream of the film industry) are few and far between. Watching (and hearing) the visually stunning and grand "Supper" in  Blu-ray alone justifies holdouts upgrading to this format. The good news for folks who lack this technology is that Random Media and Cinedigm have also released the film on DVD and VOD.

This grand depiction of Liu Bang, who is the first emperor of the Han Dynasty in China, reliving his past glories and not-so-proud moments in the final minutes of his live evokes terrific thoughts of classic Shakespearean drama. One can particularly see the Scottish play and "Othello" in the background.

Having these recollections lead to flashbacks illustrating these moments in the life of a man who rises from obscurity to create and lead an empire for decades prompts memories of the all-time classic film "Citizen Kane." It is nice as well that the former equals (if not surpasses) the latter regarding the artistry in telling its story despite lacking much of the technical cleverness of "Kane."

The following clip, courtesy of YouTube, of the trailer for "Supper" provides an awesome sense of the epicness and Chinese-style drama in the film. The selected snippets show that the cast of 1,000s in front of the camera and the lesser army behind all play their roles very well.

The intriguing origin story in "Supper" is that Liu uses all of his exceptional skills (and arguably undeserved reputation) to convince a literal power broker to back a campaign that is very important to Liu. As the promotional materials for "Supper" share, forming this alliance leads to a series of  fortunate and not-so-fortunate events.

The Shakespearen incidents that unfold include interrelated real and imagined betrayals, compelling variations on self-fulfilling prophecies, and Liu finding himself facing some of the same issues as (King, not Norman) Lear. A nice thing regarding these still-relevant occurrences is that they support the well-accepted theory that the works of Shakespeare are universal and timeless.

Another special thing regarding "Supper" is that it is a film regarding which writing much about the specific developments ruins the pleasure of discovering them through the lens of the director. It is promised that you will laugh, may cry, and will be entertained from the first scene to the last.

Anyone with questions or comments regarding "Supper" is strongly encouraged to email me; you can also connect on Twitter via @tvdvdguy.