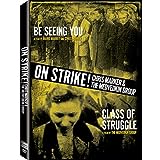 Brooklyn-based home-video distributor Icarus Films wonderfully adheres to the mission statement that declares that the company distributes "innovative and provocative documentary films from independent producers around the world" regarding the October 7, 2014 release of "On Strike! Chris Marker & The Medvedkin Group."  The awesomeness regarding the double feature in this release extends beyond the two films to the "if you think that you can do better, go ahead" message related to them.

The following clip, courtesy of YouTube and Icarus, of a trailer for "Strike" offers a good look at the subjects of the films and the awesome '60s French vibe of the film.


The saga commences with filmmakers Mario Marret and Chris Marker making the 1967 subtitled French documentary "Be Seeing You" or "A Bientot J'espere." This film depicts a labor dispute at a textile factory in the French city of Besancon. Much of the roughly 40 minutes in this film consists of labor leaders yelling outside to stir up their troops.

Although these impassioned pleas and the more sedate discussions regarding the unwarranted exploitation of workers throughout France during the period of the strike are interesting, they get tedious after roughly 20 minutes. Additionally, the intense anger gets a little unduly volatile.

The workers in said factory having their own issues regarding "Seeing" prompt them to meet with the filmmakers to discuss their concerns. The gist of their comments relate to the manner in which Marret and Marker portray the workers.

Icarus nicely inserts a 12-minute special feature titled "La Charniere," which rough translates to "pivotal," that consists of audio of the reactions of the workers on "Seeing" in the DVD menu between "Seeing" and the follow-up film "Class of Struggle."

Icarus tells us that "Struggle," which is easier than "Seeing" to watch, is a collaborative effort between Marker and the workers. Icarus adds that this new organization is named The Medvedkin Group in honor of a Russian filmmaker whose documentaries focus on laborers in the Soviet Union.

"Struggle" is a kinder and gentler film than "Seeing." The focus this time is a labor dispute at a watch factory near the mill around which "Seeing" is focused. The overall tone is much less strident and uses a slightly broad range of narrative techniques.

Watch factory worker Suzanne Zedet is a wonderful focal point regarding the latter film; one can relate both to her less combative approach to representing workers than the boys at the mill, and the film properly documents the consequences of Zedet becoming involved in those efforts.

The examples of the lighter tone of the latter film include an amusing segment on the role of women in the watch factory and the advantages that they provide over their male counterparts.

Examples of the retribution include communication from management going from letters that strongly praise Zedet for her good work and that regularly increase her salary in the period before her efforts to organize her fellow workers to critical ones after that effort. They cut her salary, try to drive her out of the factory, and discipline her for direct and indirect organization activities.

Le fin regarding these three films and the mannerr in which they are made are that they provide a chance to see genuine historical documentaries within the proper context of those films. The only thing left to say regarding "Seeing" and "Struggle" is vive la difference.

Anyone with questions or comments regarding "Strike" is welcome to email me; you can also connect on Twitter via @tvdvdguy.